Caring for pandas a dream-come-true 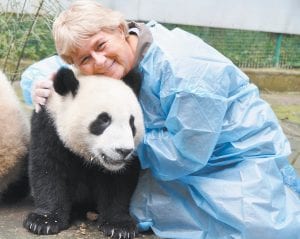 Connie Hall Fields realized the dream of a lifetime when she was able to travel to China earlier this fall to help care for giant pandas, as seen in photos above and below.

Connie Hall Fields is still beaming with excitement after fulfilling a long-time dream of hers in mid- October. Fields, a Letcher County native, recently spent 10 days in China, with at least half of the trip being dedicated to taking care of giant pandas.

“I think people give up on their dreams because it seems so farfetched,” said Fields, who now lives in Perry County where her husband works for Appalachian Regional Healthcare. “Never in my wildest dreams did I think I would go to China and play with panda bears. If you don’t hold onto that dream, it will never happen.”

Fields is fascinated by pandas and decided after she retired four years ago as a social worker she wanted to find a way to learn more about the endangered animals. She wanted to see them up close and maybe even interact with them.

“They’re just beautiful,” said Fields. “They’re black and white and very simplistic. What’s not to love about them?” 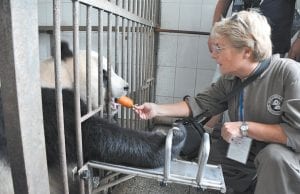 Fields searched on the Internet for a way to experience one of her dreams, and found success last December. She learned by looking on the Panda International website that a company existed in Reno, Nev., that off ers panda tours in China.

After saving money, obtaining a visa and doing the legwork for the trip, Fields and four people she had never met traveled more than 7,000 miles to the Bifengxia Panda Center at Ya’an City, Sichuan Province.

“It’s a fairly large preserve,” said Fields. “It’s where pandas were brought after an earthquake in Wolong a few years ago.”

At least 80 pandas are taken care at the reserve. The center includes a panda kindergarten with about eight to 10 pandas and a panda infirmary. Fields watched pandas being fed by a bottle and watched mother pandas interact with their babies. 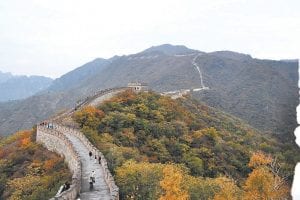 Pictured above is one of several walls that make up the Great Wall of China, photographed here in full fall glory by Connie Hall Fields during her recent trip to China to care for giant pandas.

Fields worked with a panda keeper, who in Chinese is a called master.

Once the pandas were removed from their cages, Fields, dressed in coveralls, rubber boots and gloves, cleaned out panda cages by getting rid of old bamboo and panda droppings. She used a broom made of straw from leaves of bamboo to clean the cages before hosing them down and placing new bamboo for the panda bears to eat.

“Ninety-nine percent of the pandas’ food content is bamboo and they have to eat it constantly to get the nutrients they need,” said Fields.

She was amazed at how quickly pandas chew through the bamboo stalk and eat the middle portion. Pandas also eat bamboo shoots, which are a smaller type of stalk. They peel it off and eat the insides.

“It takes literally seconds,” said Fields. ““Their teeth, my gosh, they have big teeth.” 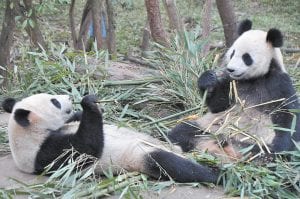 Fields cleaned cages and fed the pandas from Oct. 18 through Oct. 22.She handfed the bears carrots and “panda cake,” which is a smattering of nutrients meshed together, at 9 a.m., 10 a.m. and 11 a.m., reaching her hand through their cages each time. At 2 p.m. and 3 p.m., she fed the panda bears apples and more panda cake. The cake is sliced into pieces and weighed based on the animal’s age and height.

“Their eyesight is not very good,” said Fields. “They have an extra thumb to help hold food.”

Fields said feeding is the only human contact the adults pandas get unless they require medical attention.

With numerous attendants nearby, Fields was allowed to go inside a play area and interact with the one-year-old pandas for five minutes on Oct. 21 while the bears were eating. She was required to wear a paper gown, booties and gloves, but was able to hug, kiss, cuddle and play with the pandas. 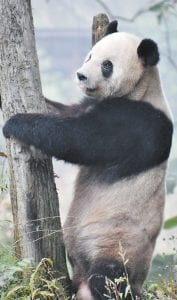 Pandas are an endangered species native to central-western and southwestern China. They are easily identifiable by their black patches around their eyes. (Photo by Connie Hall Fields)

“They are cuddly, but the hair is very coarse,” said Fields. “They are just beautiful.”

Her group enjoyed playing with the bears so much they were allowed to join them again for a few more minutes on Oct. 22. This time Fields received a scratch on the nose from a panda.

Fields said if given the opportunity she would go back to the reserve and take care of pandas again. She said Zhou is considering having a reunion of all of the people who have done panda tours during the past decade when a new reserve is opened in Wolong. She may go back then.

“Yes. It was absolutely beyond anything you could ever imagine,” said Fields. “My husband, Donnie, kept saying ‘I think you are going to be disappointed’.”

“Americans don’t have a clue in knowing how blessed they are,” said Fields.

She and her group stayed in a four-star hotel about 45 minutes away from the reserve. She was surprised by the type of bathrooms found in her travels, called “squat bathrooms.” Fields described them as outhouses without the outhouse.

She quickly tired of the food choices and lost about five pounds during the trip.

“I ate rice every meal ,breakfast, lunch and dinner, and whatever vegetables I could figure out,” said Fields. She also ate lots of melon. Drinks were not served with ice and the soft drinks were warm. Juice was served hot.

“The only American food I could find were M&Ms and Snicker’s bars,” said Fields, adding that she got excited when she found a McDonald’s restaurant in Shanghai.

Fields said the language barrier made it challenging for her at times, but was able to use a conversion chart on her smartphone to figure out how much items cost.

“You could smile,” said Fields. “A smile is the same no matter where you are.”

Fields said she was surprised to learn that China isn’t as advanced as she had believed.

“When you think of China you think of rich technology and everything made in China but you don’t see that,” she said. “It was an absolute culture shock. People were riding rickshaws and bicycles and that was the major form of transportation. Such a large area of where we went was from years and years ago.”

Fields said many Chinese residents have cellular phones. She also noticed an abundance of fruit stands and erratic traffic patterns, and was fascinated by a Chinese wedding witnessed.

“They scream,” she said. “That’s what they do at weddings.”

She also noticed the Chinese residents were curious about Americans.

“Everywhere we went, Beijing, Forbidden City to Chengdu, especially when older people would see us, they would want to have their pictures taken with us,” said Fields. “They were almost drawn to us.”

She said on her flight back an older Chinese woman patted on her hand for most of the flight.

Fields will get the opportunity to share her memories of her oncein a-lifetime trip with others.

Representatives of United Way have asked Fields, an accomplished photographer, to chose 15 of her favorite photos she took on her trip to display at area high schools. Whitaker Bank is sponsoring the exhibit, which will begin sometime this winter. The photos will rotate between Jenkins, Letcher County Central, Perry County Central and Hazard high schools.

Fields, a longtime member of the Letcher County Mountain Heritage Committee, took 4,000 photos during her trip to China.

Fields will also talked about her trip this week at a meeting of the Hazard Rotary Club.

“I had to save money and put forth some legwork,” said Fields. “If you want something bad enough you can do it.”