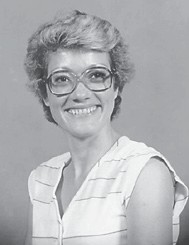 A daughter of the late Christopher Columbus and Vadna Mullins Sanders, she was also preceded in death by a sister, Della Mae Quillen, and two brothers, Belve Sanders and Birin Sanders.

Mrs. Johnson was a member of the Church of Christ of Prophecy at Burdine.

A graveside service was held Tuesday, November 10, at the family cemetery at Jenkins.