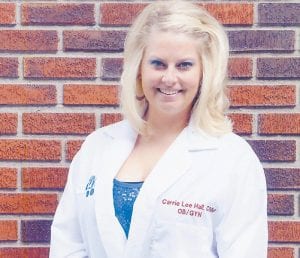 Carrie-Lee Hall tells why she wanted to be a nurse.

A Letcher County nurse is one of 75 from across the nation chosen to be profiled in a new book by an awardwinning photographer and filmmaker.

Carrie Lee-Hall, who has worked at the University of Kentucky North Fork Valley Community Health Center in Hazard for the past four years, told filmmaker Carolyn Jones why she wanted to be a nurse.

“She was so appreciative of me and she taught me a lot about life, “ said Lee-Hall in “The American Nurse.”

Jones interviewed Lee- Hall on the topics of infant mortality and transportation in rural Kentucky and quality versus quantity care. Those film clips can be viewed at american- nurseproject.com/interviews.

Lee-Hall participated in Jones’s project because she wanted to tell her story.

“I’m just so proud of my heritage,” said Lee-Hall. “I wanted everyone to know this story of why I wanted to become a midwife and the importance of nursing care.”