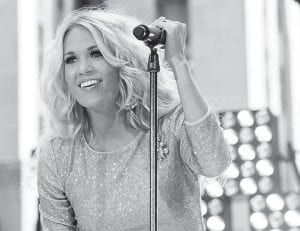 Carrie Underwood will perform at the KFC Yum! Center in Lousville on Sept. 21 as part of her “Blown Away” tour. (Invision/AP)

It’s getting harder and harder for Carrie Underwood to leave home.

On Saturday, she will perform just the fifth show of the U.S. leg of her 50-plus-date “Blown Away” tour in Louisville and that means months and months away from her husband, Mike Fisher, a star with the NHL’s Nashville Predators.

The two spent much of their early relationship apart, but now that they’ve been together since Fisher moved from Ottawa, Canada, to Nashville, walking out the door has become somewhat more traumatic — though the couple got more time together because of ongoing NHL labor negotiations.

“I was like is it wrong to hope for a little bit of a walkout?” Underwood joked. “I’m not sure. I’m feeling kind of happy that they’re still in negotiations. Sorry. We got used to being apart when he lived in Ottawa. Before he moved to Nashville we dated that way and our first half-a-year of marriage at least was spent that way. It’s just been so cool. He’s been here a lot.”

Now it’s Underwood’s turn to leave. She spoke with The Associated Press about her tour, which stops at the KFC Yum! Center, and her growing popularity overseas and her transition into the Twitter world.

AP: You already started the new tour overseas. What was the response like?

Underwood: When we went to London and Australia they knew every single solitary word to every single song. And I was pleased, yeah. Because I wouldn’t have been played on the radio as much as I would be over here. So if they went to that show, they probably went out and bought that album to make sure that they knew everything that there was to know. It’s really cool. It’s something I’ll remember later on. Those are my words and to hear people singing them back to me is really special.

AP: On your last tour you flew over the crowd in a pickup truck. How do you top that?

Underwood: (It will be) defi- nitely spectacular, kind of producing the same results. But I really love to get to the back of arenas. On the stage you can see the first few rows, but then after that it’s just kind of noise. And being able to put faces to an audience has been really cool. So that was important to me to be able to do something like that again.

AP: Were you ever that fan in the back of the arena?

Underwood: Way back when (laughs) when I was going to concerts and spending my allowance money to be able to go. I was in the back and it would have been really cool for someone to pull out a gag like that and just to be a little closer and you’re not just watching them on the screens by the side of the stage. You can make out facial features and stuff like that for yourself in person. It’s important to me to make sure everybody has a great show, whether you’re in the front or whether you’re in the back.

AP: Were you aiming for a certain feel for this concert tour?

Underwood: Everything is very dramatic. I feel like the album, the “Blown Away” album, was really visual, really dramatic and we definitely carry that into the show. We have obviously our slower moments. It can’t be tense and dramatic all the time. It really is a little spectacle. We have a lot of weather-related things going on in the show. We really start off kind of heavy and a bit tumultuous. We have a lot of beautiful screens behind me and a lot of beautiful environments we can make on the stage that tell a story. It’s kind of like watching a movie and you’re at the concert.

Underwood: I kind of wish I was a better Twitterer (laughs). I do think it’s such a useful tool and it allows us to just be able to get information straight from the horse’s mouth. It’s really great sometimes. And it’s fun. I feel like some people that I know who are super into it are REALLY into it, and I don’t know if I want to be quite like that. But it’s good, so far.

AP: Have there been any negatives that you were worried about?

Underwood: It’s been really relatively good so far. No complaints or anything like that. There’s always going to be people that don’t like you or whatever. If you’re on Twitter or you’re on Facebook, you’re going to get it no matter what you do. So I feel like I’ve gotten better over the years, definitely better with handling stuff like that. That’s what the block button is for, right?