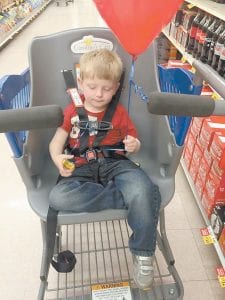 While Stacy Wright shopped at Food City in Whitesburg on Monday, her four-year-old son Logan Wright enjoyed riding in Caroline’s Cart, a shopping cart designed to carry children and adults with special needs.

Grocery shopping at Food City in Whitesburg is now much easier for Stacy Wright and enjoyable for her four-year-old son Logan, thanks to a new shopping cart designed for children and adults with special needs.

“It makes a world of difference,” said Wright, of Whitesburg. “Of course it is different for every child. I wish all stores would do this. ” e

Th shopping cart made by Technibilt is called Caroline’s Cart, which is named after the daughter of Drew Ann and David Long. Drew Ann Long designed the cart for her daughter and other children with special needs to be able to participate in mainstream society with their families.

Food City purchased one art for each of its stores.

“It makes me very happy,” said Wright. “They are making it easier for me to bring him out in public and that means the world to me.”

Logan is autistic and doesn’t have the flexibility or understanding to slide into a shopping cart or high chair. Wright lifts her son above her head to get him into regular shopping cart, which sometimes comes with tears.

“He just walked right up to it and sat down,” said Wright.

She adjusted the seatbelt — made similarly to the belt on his car seat — and knew that Logan felt secure when he was riding around the grocery store with one leg tucked behind the other.

“That shows that he is comfortable,” said Wright. “The movement of the shopping cart is soothing.”

With the specialized cart, Logan isn’t as close to the aisles as he is in a regular shopping cart, which keeps him from taking items off a shelf.

“Whether they are four or 34, it is going to help a lot of people,” said Wright. “I can’t thank Food City enough.”

Renee Chapman, assistant store manager at Food City in Whitesburg, said providing a Caroline’s Cart shows an “acceptance” of those with special needs.

“Acceptance is actually doing something about it,” said Chapman. “Food City owner Steve Smith thought it was a good idea to roll it out to all of our stores. When I first saw it, I almost started crying for the fact that our company would care so much.”

Chapman said it is difficult for parents to push a wheelchair and shopping cart at the same time.

“Everyone I have seen use (the Caroline’s Cart), their children are sitting there so peaceful,” said Chapman.

“That child was perfectly still,” said Chapman. “They all looked very happy to me.”

Assistant store manager Vanessa Sturgill is among those parents limited by the number of stores where she can take her two special needs children.

“It’s hard to tell her we can’t go somewhere,” Sturgill said, referring to her daughter. “We struggle with these buggies.”

It is painful to Sturgill’s daughter when she has to sit in the regular shopping carts. Sturgill said her daughter is excited to try out the Caroline’s Cart.

“It’s incredible,” said Sturgill. “It will be a big relief for me.”