‘Cash for Clunkers’ program expected to get more money 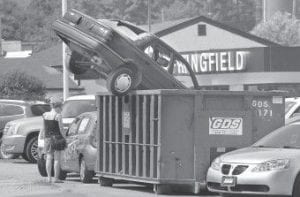 A woman shopped last week for a car at Springfield Auto Mart in Springfield, Vt., a dealer for Buick, Pontiac and GMC. Above her is a car that was dumped in a Dumpster as a visual promotion for the government cash-for-clunkers program. (AP Photo/Rutland Herald)

The Senate will vote to extend the popular “cashfor clunkers” car purchase program before going home on Friday, Majority Leader Harry Reid declared Tuesday in a strong signal the U.S. government will not let the trade-in rebates die under the surging demand that has almost exhausted federal backing.

Reid’s Republican counterpart, Sen. Mitch McConnell, predicted his party would not block a vote and “the matter will be completed.” Republicans were still demanding a chance to amend a Housepassed version that would extend the program into September, but Democrats were confident the bill wouldn’t be changed.

“We’ll pass cash for clunkers before we leave here,” Reid said after Democrats lunched at the White House with President Barack Obama, who has pushed hard for the Senate to go along with the House in adding $2 billion to the program’s original $1 billion.

Buyers of new cars and trucks have swamped formerly deserted auto dealers to claim their rebates — up to $4,500 when they trade in older models that get significantly worse gas mileage. The older vehicles are then scrapped.

The program has encouraged about a quartermillion Americans to buy new cars at time when the economy is still in recession and badly needs a boost.

Because the House has already recessed for August, any change by the Senate would effectively interrupt the rebate program until Congress returns in September. Consumers who do not get in on a deal this week would have to wait until then to take advantage of the rebates, assuming eventual passage.

“I think the last thing any politician wants to do is cut off the opportunity for somebody who wants to get a rebate to buy a new automobile,” Transportation Secretary Ray LaHood, said Tuesday.

On Monday, the White House had warned that the program could come to an abrupt halt Friday if the Senate did not act favorably on the bill passed by the House last week transferring $2 billion from an economic stimulus account that had been set aside to subsidize renewable energy. The new money would carry the program through September, said White House Press Secretary Robert Gibbs.

Opposition to extending the program has been dissipating. One vocal Republican critic, Sen. Jim DeMint, said Tuesday he would not try to block the legislation. And three lawmakers who wanted the program limited to the purchase of even more fuel-efficient vehicles said Monday they would back the plan.

“People want to know what’s going to be next. Cash for shoes? Cash for groceries?” said Sen. Richard Shelby, a Republican.

The first $1 billion in funding is expected to lead to sales of 250,000 vehicles and the additional $2 billion would generate sales of perhaps a half-million more vehicles.

Car companies have credited the clunkers program with driving up sales in late July. Ford said its sales rose 2.4 percent in July from the same month last year, its first year-over-year increase since Nosion vember 2007, while Chrysler Group LLC posted a smaller yearover year sales drop compared with recent months, helped by the special deals. Other automakers are doing better, too.

Most consumers are buying smaller, more fuel efficient vehicles under the program, according to a list of the top-10 selling cars released by the National Highway Traffic Safety Administration.

That includes Honda Civics, Toyota Corollas and Dodge Calibers. The Toyota Prius hybrid, which gets 46 miles per gallon (20 kilometers per liter) according to government estimates, is the fourth-best-selling car. There is one sports utility vehicle on the list, the Ford Escape, which also comes in a hybrid model that can get up to 32 miles per gallon.