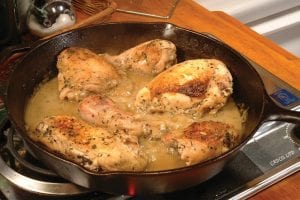 This photo shows Cast-Iron-Style Smothered Chicken. Recipe on Page B8.

My love affair with cast-iron cookery began when my mother, Angeline, gave me the heavy, black cast-iron skillet that originally belonged to my grandmother. The thing I love most about cooking in my grandmother’s cast-iron skillet is that it’s a direct connection to my history and heritage. I don’t fry foods very often, but my heirloom skillet is my pan of choice for the task. As I stand there turning pieces of fish or chicken in the bubbling, hot oil, I think about all the other women in my family who have done the same with this pan.

Properly seasoned cast iron was the nonstick cookware of its day. It can stand up to high heat and almost any type of utensil. Cast-iron cookware also leaches small amounts of iron into the food, a helpful benefit for those who have iron deficiencies. Cast iron heats up slowly, so using the cookware requires a little patience, but once it’s hot, it distributes the heat evenly and holds it steadily like an oven, and seasoned cast iron doesn’t require oil to sear or blacken meats.

Recently, I purchased a large cast-iron skillet for my daughter, Deanna, which she immediately put to use to pan-sear fish. So, from mother to daughter to granddaughter and great-granddaughter, the cast-iron tradition continues in our family, one fabulous meal at a time. And to think that it all started with a single pan from my grandmother, Willie Mae.

1. Place a large, cast-iron
skillet over high heat. Sprinkle the bottom of the skillet
evenly with the salt. Wash
the chicken pieces and pat
dry with food-safe paper
towels. Sprinkle pieces with
pepper and poultry seasoning. Place the chicken
pieces, skin-side down, in

the hot skillet. Cook on high
for 3 to 5 minutes.
2. Cover skillet with a
heavy lid and turn heat
down to medium. The
chicken will release juices
and fats that will “fry” the
chicken and crisp the skin.
Let chicken cook about 30
minutes.
3. Remove chicken from
skillet and set it aside on a
plate. Combine the flour
with the juices in the skillet
until smooth, about 2 to 3
minutes. Add the water or
broth. Stir to combine. Turn
heat to high to thicken. Add
the butter. Turn heat down
to medium. Place chicken
in skillet, skin side up. Cover
skillet with the lid. Cook
the chicken about 15 to 20
minutes until tender. Serve
over rice. Makes 6 servings.
Angela Shelf Medearis
is an award-winning children’s author, culinary historian and the author of
seven cookbooks. Her new
cookbook is “The Kitchen
Diva’s Diabetic Cookbook.”