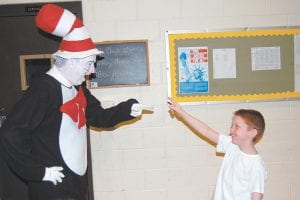 THE ‘CAT’ VISITS — Acting as The Cat in the Hat, Keith Adams joked with Landon Tolliver, a first grader at West Whitesburg Elementary School, on March 3. Adams recited “The Cat in the Hat” book by Dr. Seuss at three elementary schools last week in celebration of Read Across America week and Dr. Seuss’s birthday.

Keith Adams has read “The Cat in the Hat” and other Dr. Seuss books countless times to his two sons, but last week he performed the literary classic on a much larger scale.

Adams, owner of The Looking Glass Hair Salon in downtown Whitesburg, dressed up as the Cat in the Hat in observance of Read Across America Week and Dr. Seuss’s birthday. He recited “The Cat in the Hat” during school assemblies at Fleming-Neon and Martha Jane Potter elementary schools on March 3. He also performed at a literacy event held in the cafeteria of West Whitesburg Elementary School later that evening.

“I like watching the kids’ expressions, especially the kindergarten and first graders,” said Adams.

Adams said the younger students thought he really was the Cat in the Hat and asked him if he remembered when he did certain things they had read about in the Dr. Seuss books. He said he stayed in character and would go right along with what the children were saying. 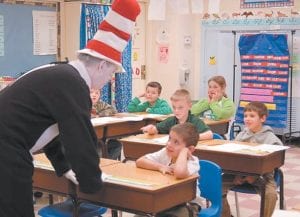 Adams dressed up as the Cat in the Hat for the first time back in October when WWES hosted a Halloween event in downtown Whitesburg. Some of the teachers had asked Adams if he would dress up again for Read Across America Week and this time he decided to act the part.

Adams was graduated from Western Kentucky University with a bachelor of arts degree in theater and English. He won two national awards as a performing artist for Redken.

Now he has been invited to make additional appearances at schools as the Cat in the Hat. Adams, who has also dressed up as the Grinch who stole Christmas, has received one request to dress up as the Mad Hatter from “Alice In Wonderland”. He said he also wants to make up a skit based on the book “Enemy Pie” by Derek Munson.

Adams said he is excited to fulfill school requests and his wife, Anne, a coordinator of the Family Resource and Youth Services Center (FRYSC) at FNES, is helping him keep track of his schedule. 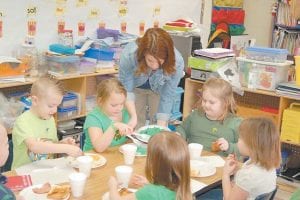 Call Keith Adams at 633-0063 to make a request for him to read at school functions.

The students wrapped up the week by cooking green eggs and ham, as inspired by Dr. Seuss’ book, “Green Eggs and Ham”.