Catch of the day … or maybe a lifetime 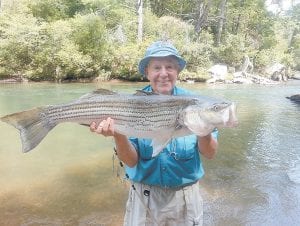 Duane Yonts of Little Cowan is seen holding a 40-inch striped bass he caught September 20 while wading the Chestatee River in Dahlonega, Georgia. He was in Dahlonega participating in a bi-annual family fishing trip, which was attended by family from four different states. For his catch he received the coveted “Golden Carp Award” which is presented each fishing trip to the person catching the biggest fish. Mr. Yonts is 80. His 86-year-old brother, Russell Yonts of Indianapolis (formerly of Letcher County), also made the trip. According to Mr. Yonts’s son, Roger, his father has caught several other large striped bass from the Chestatee, but none this big.