Catching up with ‘Blonde Bomber’ 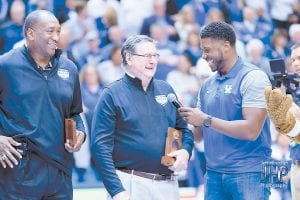 He came to Kentucky known as the “Blonde Bomber” because of his bleach blonde hair and long range shooting ability.

Jay Shidler laughs at the thought of the nickname now 40 years after he was part of Kentucky’s 1978 national champion- ship basketball team.

“That’s how I came in and I had a decent freshman year and caught people’s eyes. I don’t back down from it. I did like all that went with that nickname,” he said. “Maybe I should have left it (his hair) like that. Maybe I would have played a little better. I don’t know.

“Might have been my Samson hair or something. I enjoyed that and that’s what everybody remembers even though it was just that color for one season. But I am not going to back away from that. It’s just a different shade of blonde now.”

Karen Guess Eversole of Louisville was one of many fans glad to see the 1978 championship team recognized at UK last month — and she still remembers the “Blonde Bomber” and the impression he made on her when she was 13 years old.

“He immediately caught my attention,” she said. “I decided to keep a scrapbook that season and each page would have clippings of the games and I would have a special stat dedicated to Jay. I also logged his points.”

She was so infatuated with Shidler — like a lot of other young female fans were — that she wrote him a letter. There was no Wildcat Lodge then and she addressed it to Haggin Hall, one of the UK freshman dorms. She never heard back and has no idea if he ever got her letter.

“During those years Kentucky had an annual game at Freedom Hall and my dad would take me and my best friend to the (open) practices. We would get as close to the court as we could and shout his name hoping he would acknowledge us,” she said.

“Back then, a lot of the games would be shown on tape delay at 11:30 p.m. I would beg my parents to let me stay up and watch, even though I had already listened to Cawood (Ledford) call the game (on the radio) and knew the outcome.

I couldn’t stand the thought of not seeing them play.

“That season was so special. I guess I knew it would be and that’s why I chose to create the scrapbook. I remember being crushed that we lost two games (during the season) and being delirious when we won the title. Great memories. Can’t believe it has been 40 years,” she said.

Shidler finished his four-year UK career with 733 points (there was no 3-point shot then), 203 steals, 150 rebounds and 41 steals. He shot 45.5 percent from the field and 83 percent at the foul line. He took just 648 shots in 122 career games. That’s only about five shots per game and more than a third of those came his freshman year in 1976-7 before the arrival of guard Kyle Macy.

Shidler had scored 2,193 points in his Illinois prep career, including 1,013 his senior year that still ranks as the 14th best single season mark in Illinois history. He also played football, baseball and golf. At times he even found time to run track.

“It kept me out of trouble staying busy,” he laughed and said.

Eversole has remained a Kentucky fan. Her grandmother was from Marion and was a 1931 UK graduate.

“She’s the one that instilled in us the love of UK. She lived with us and would watch the games in a separate family room because she’d get too nervous, but we could hear her yelling at the TV,” Eversole said. “During timeouts she would come into our family room to discuss game strategy.”

Eversole attended UK from 1982 to 1984, got married and has raised two “fanatical” UK fans in Louisville. Her oldest son is high functioning autistic and she says he knows “everything” about UK — he even wrote some columns for Kentucky Forward, an online publication. Her youngest son graduated from UK in 2016.

She eventually did get a Shidler autograph at a Kentucky open practice.

Shidler admits there are a lot of fans who share similar type stories with him. He wishes now there would have been a way to interact with more fans but he enjoys being remembered.

“I was not the best player at Kentucky but apparently I did enough to make people remember me and make me think I should have kept that blonde hair more than just one year there,” Shidler, who still lives in Lexington, said.

Just when it looked like John Calipari’s team had figured out what it took to be a consistent winner, the Cats reverted in the 80-67 loss at Florida. The Cats once trailed by 23 points and fell apart on defense.

Calipari has never been a fan of the SEC Tournament but he has to like UK’s bracket that will have the Cats playing either Georgia, Vanderbilt or Missouri in the first game on Friday about 3:30 p.m. If the Cats get to the semifinals, they would have to play either Alabama, Texas A&M or Auburn. Auburn won the league but it seems to me A&M would be the most difficult matchup for UK.

However, Calipari made it clear after UK beat Ole Miss and certainly re-emphasized it after UK lost to Florida that the Cats had to do two things much better — pass and play defense.

“This could be a great tournament,” said Chris Dortch, editor of Blue Ribbon College Basketball Yearbook. “Kentucky had looked like it was peaking. Tennessee is a team I think is built to win this. I never thought Tennessee could sweep Kentucky this year, but it did. Some of it was luck. But they also beat Florida twice, beat Purdue and could have beat North Carolina. They have some depth and enough size. They play good and they have fixed their offense, so they could definitely win it all.

“This is a tough league. There really have not been many games that you look at and say it would not be a good game. It has been like that all year. It’s been the strongest year top to bottom in the league I can remember other than maybe Ole Miss.”

Former LSU coach Dale Brown remembers plenty about Kentucky’s 1978 national championship team. LSU gave Kentucky one of its two SEC losses when all five LSU starters fouled out but the Tigers still won 95-94 in overtime over No. 1 Kentucky.

That’s the year Brown also said after his team lost to UK in Lexington that Kentucky played a “karate defense” because of its physical style.

However, Brown grew to have a deep appreciation for that team and former UK coach Joe Hall.

“I am really fond of Joe. He is a true gentleman. Please give him a hug from me and tell him I love him,” Brown said when I told him the 1978 UK team was being honored. “Give them my best wishes and congratulations. Most knowledgeable fans in the U.S.A., too. Also, some doggone good sportswriters.”

Well, not quite sure about that last comment but I’m proud to have counted Brown as a friend and that gave me a chance to understand how he used the UK program as the standard he wanted LSU to reach.

I also remembered that the 1978 team took the “karate defense” label as a compliment.

“We were very physical. The first time I had ever lifted weights was when I got to UK,” Jack Givens said. “But we had guys who liked to make the other team hurt. I tell people we were nice about it. If we knocked a guy down on a screen, we would help him up. But the defense usually loosened up after that.

“Rick (Robey) and Mike (Phillips) would set screens on people. Lavon (Williams) and James (Lee), we had to try and stop them from setting screens because they hurt people. We played that way and enjoyed it. It was just how we played.”

Look for some changes in Kentucky’s non-conference schedule next year based on what Kentucky coach Matthew Mitchell is saying.

Kentucky had a brutal non-conference schedule this year and Mitchell says it needs to be a “learning opportunity” for him about next season.

“I think just because of the success we’ve had and the formula we’ve had, we’ve always scheduled tough in the non-conference and we were able to handle it last year with a very short bench. But we had two veterans, future pro’s on the team that helped us navigate through that, and the placement of those games helped us out,” Mitchell said. “There’s no doubt that as we are trying to get our roster back to full strength and trying to recruit and add players that I must learn some lessons from this season and how it was scheduled.

“We had the most difficult conference schedule in so many ways, so difficult I can’t remember one more difficult. We would have been just fine if the non-conference had not been so tough and challenging. There’s no one to blame for that but myself. I can promise you we will look at that closely and improve and learn.”

Kentucky signee Blair Green made it to the state tournament at Northern Kentucky University after leading Harlan County to the 13th Region championship.

Harlan County rolled to a 78-51 win over North Laurel in the regional title game when Green had 32 points on 12-for-18 shooting, six assists, five steals, two blocks and two rebounds.

That meant she averaged 31 points per game in regional play when it counted most for her team.

Harlan took a 28-2 record and 18-game win streak into the state tournament.

Green is also one of the leading contenders for Miss Basketball honors. The winner will be announced March 13 in Lexington.

Quote of the Week 1: “I never thought he could be the player who was hyped to be coming into Kentucky. I never saw him as a first-round pick. He had great measurable skill but his basketball savvy is not there yet. The idea he is a points and 35 minutes a game is just not reasonable,” national college basketball writer Aaron Torres on UK freshman Hamidou Diallo.

Quote of the Week 2: “The weight of expectations on a guy playing on a stage like the one at Kentucky can be crushing. When you are 18 or so and not playing well for the first time in your life under the bright lights it can be hard to find yourself. A lot of these guys are more capable than they have played and you can see it coming together now,” CatsPause recruiting writer Chris Fisher on UK’s freshmen basketball players.

Quote of the Week 3: “I am done with the Bengals. Most of time it was fun. Last year was not fun at all. I am a preparation person. I really disliked the prep last year immensely. I appreciated the opportunity, but I am done,” retiring WLEX-TV sports director Alan Cutler on not being on the Bengals Radio Network next season.