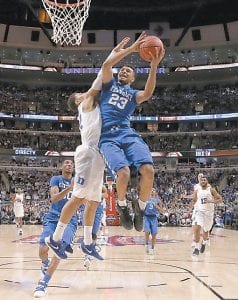 Tyler Ulis scampered up and down the court. Jamal Murray muscled his way to the basket. Marcus Lee and Alex Poythress finished with authority.

Another year, another impressive bunch of Kentucky Wildcats.

Ulis had 18 points and six assists, and No. 2 Kentucky used its speed and athleticism to pull away from No. 5 Duke for a 74-63 victory in the Champions Classic on Tuesday night.

“We’re going to be trouble in a fast-paced game like this,” Ulis said. “Whoever gets the rebound … they just get out, push it on the break and we’re very unselfish with the ball.”

Kentucky (3-0) scored 17 points off 16 Duke turnovers and enjoyed an 18-4 advantage in fast-break points. Murray scored 11 of his 16 points in the second half, and Isaiah Briscoe added 12 points as the Wildcats placed four players in double figures.

“If we learn to fight every possession, play the guy before he catches the ball, be alert defensively and stay in the stance … and play off of one another, we’re going to be really good,” coach John Calipari said. “If we don’t, we’ll be an average team.” 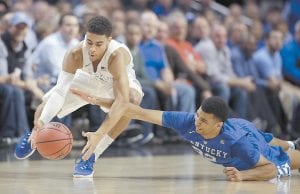 Duke guard Derryck Thornton, left, grabbed a loose ball as Kentucky forward Alex Poythress fell to the floor during the first half of Kentucky’s win over Duke Tuesday night in Chicago. UK will host Wright State on Friday. (AP Photo)

Grayson Allen, who scored 54 points in Duke’s first two games, was held to six points on 2-for-11 shooting. He got his first basket on a 3-pointer from the corner with 12:08 left in the second half.

“This is a very athletic, physical team,” Allen said. “I think the bigs were a lot taller than the teams that we’ve played so far. They did a great job of rotating over. The guards did a great job at pressuring the ball. They played a great team-defensive game today.”

Spurred on by a pro- Kentucky crowd, the Wildcats grabbed control with a 10-2 run early in the second half. Murray kicked it off with a layup and a dunk, and Skal Labissiere’s layup made it 49-38 with 14:48 left.

Calipari’s team was never really challenged again. The Wildcats opened their biggest lead when Ulis, a 5-foot-9 Chicago native, converted a layup to make it 71-55 with 4:09 to go.

“We weren’t who we should be tonight, right from the start,” Blue Devils coach Mike Krzyzewski said.

Lee had 10 points, 10 rebounds and two blocked shots for Kentucky, and Poythress finished with nine points and seven rebounds.

Matt Jones made three 3-pointers and finished with 16 points for Duke, which shot 40.7 percent from the field, compared with 44.8 percent for Kentucky.

The opener of the fifth edition of the Champions Classic featured the defending national champions and another Final Four team in Kentucky. The Wildcats opened last season with 38 consecutive wins before losing to Wisconsin in the NCAA Tournament, and the Blue Devils beat the Badgers for their fifth title.

NBA scouts filled many of the courtside seats at the home of the Chicago Bulls, and they were treated to quite a show.

Lee had a couple of impressive alley-oop dunks in the first half, one off a nice pass from Briscoe from just inside half-court, and a reverse jam off a slick setup by Ulis. Plumlee, the younger brother of NBA players Miles and Mason, got free inside for nine quick points in the first four minutes.

But the Wildcats began to control the inside, and the Blue Devils struggled to find open shots. Briscoe slipped inside for a layup in the final seconds of the first half, lifting Kentucky to a 37-31 lead at the break.

Lee and Labissiere each fouled out, and Poythress finished the game with four fouls. But Calipari played nine guys at least seven minutes.

“My staff said after, I said ‘What do you think?’ They said we’re deeper than we thought,” Calipari said.

Ulis was 6 for 13 from the field in 40 minutes. The sophomore had no turnovers, two steals and a blocked shot, earning kudos from Krzyzewski.

“He really takes control of the game,” Krzyzewski said.

Duke: Jefferson was 7 for 8 from the field and is shooting 73 percent (19 for 26) through the first three games. … The Blue Devils dropped to 3-2 in the Champions Classic.

Kentucky: The Wildcats lead the all-time series against the Blue Devils 12- 9. They had lost three in a row to Duke.

Duke: Takes on VCU on Friday night in the 2K Classic in New York.