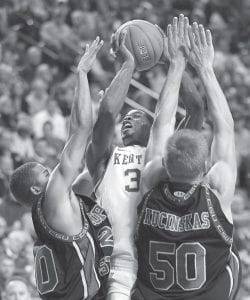 SQUEEZE PLAY — Kentucky’s DeAndre Liggins, center, tried to take a shot between Coppin State teammates Jordan Lee (20) and Ceslovas Kucinskas (50) during the Wildcats’ victory Tuesday night. Kentucky’s next opponent will be the University of Louisville in a game played at noon on Friday (New Year’s Eve) at the new KFC Yum! Center in downtown Louisville. The game will be nationally broadcast on CBS. (AP Photo/Ed Reinke)

If Kentucky forward Darius Miller was looking past Coppin State to the 11th-ranked Wildcats’ showdown with rival Louisville on New Year’s Eve, it didn’t show.

Throwing himself onto the floor after a handful of loose balls and playing with an efficiency he’s lacked at times this season, Miller did a little bit of everything in Kentucky’s 91-61 rout of the Eagles on Tuesday.

The junior forward’s numbers weren’t spectacular: seven points, six rebounds, four assists, two steals and a block in 27 energetic minutes, but for a young team in need of consistent play from one of its few veterans, it’s a start.

“Coach has been staying on me, especially in practice and it’s carrying over into the game,” Miller said. “I’m just trying to play with high intensity and stay aggressive.”

The Wildcats (10-2) had enough of both to easily handle the undermanned Eagles (4-6) to win their fifth straight heading into Friday’s game against the 22nd-ranked Cardinals.

Terrence Jones led Kentucky with 18 points, Brandon Knight added 17 points and eight assists but it was the play of the sometimes reticent Miller that drew the highest praise from coach John Calipari.

“I loved it,” Calipari said. “That’s as good as he’s played in a long time. And the main thing was he got aggressive. … if he’ll go rebound and battle like that, you’re going to see his game blossom.”

Miller hit the floor scrambling for loose balls three times in the opening minutes, setting the tone as Kentucky dispatched the Eagles.

The Wildcats shot 57 percent from the field — including 74 percent in the second half — and had 21 assists on 35 field goals, a number Jones attributed to the growing trust among the players.

“Guys are (looking) for assists more than they are making a big shot,” he said.

Jordan Lee led Coppin State with 11 points while Tony Gallo and Akeem Ellis added 10 points each but the Eagles couldn’t keep up with the Wildcats.

“I thought we would be a lot more competitive than what we were today,” Coppin State coach Fang Mitchell said. “I think that the lights got to them and we never really got started. We never really had a flow into the game.”

Kentucky dominated the undersized Eagles, outrebounding them 43-22 and outscoring them 46-26 in the paint. The Wildcats’ outburst included 29 points by bench players, a welcome sign for a team looking for more depth before it starts Southeastern Conference play next week.

Still, it wasn’t exactly enough to please Calipari, who insisted he’ll stick to a six-man rotation even if it puts the Wildcats at a potential disadvantage against deeper teams.

“If they play well, you leave them in,” Calipari said. “If they’re not playing well or they’re tentative or not talking or whatever … then you play with six.”

The Eagles played without scoring leader Michael Harper, who had the flu. Coppin State certainly could have used him, particularly early on as it tried to gain its footing against the Wildcats. The Eagles missed their first 11 shots before Lee hit a layup in traffic.

By then Coppin State trailed 15-4, though the Eagles did show enough signs of life to prompt Calipari to call a frustrated timeout following a brief spurt that brought the them within 20-11.

No biggie. DeAndre Liggins converted a difficult layup while drawing the foul before Lamb followed with a jumper from the corner. Jones dunked moments later, quickly followed by another basket by Lamb.

After Jones hit a nifty pullup just before the buzzer, the Wildcats led 40-19 at the break and could start turning their full attention toward Louisville.

“I know what this rivalry means to the program,” said Miller, a native of Maysville, Ky.

The two rivals played one of the uglier games in the series’ history last season, a foul-marred Kentucky win that featured plenty of venom on both sides.

Kentucky’s depth and talent eventually wore Louisville down. This year, the 22nd-ranked Cardinals are the deeper, if not more talented, team.

Yet Calipari has praised his freshmen-laden roster, featuring star freshmen Jones, Lamb and Knight, for its maturity. The Wildcats showed it during a sharpshooting second half in which they shared the basketball to look for open shots.