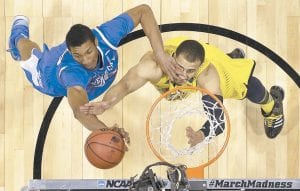 Kentucky’s Marcus Lee, left, and Michigan’s Jordan Morgan went after a rebound during the first half of the Wildcats’ Midwest Regional final college basketball tournament win in Indianapolis on Sunday. Lee, a surprise star off the bench in the absence of Willie Cauley-Stein, will be called on Saturdy to help contain Wisconsin’s 7-foot star Frank Kaminsky in Final Four action. The Kentucky-Wisconsin game set to tip off at 8:49 p.m. It will be telecast on TBS following the UConn-Florida game scheduled for a 6:09 tipoff. (AP Photo)

Kentucky faces a Texas-sized task defending Wisconsin 7-footer Frank Kaminsky, and not just because he’s the tallest player the Wildcats have faced in the NCAA tournament.

The Badger junior’s ability to score inside and outside forces the Wildcats (28-10) to keep a body on him near the basket and deny on the perimeter.

Increasing the challenge for Kentucky’s frontcourt is the absence of 7-footer Willie Cauley- Stein, who’s sidelined by an ankle injury. With Cauley-Stein out, Kentucky will turn to 7-0 freshman center Dakari Johnson — who has developed into an inside presence during the postseason — and Marcus Lee.

Still, nothing the Wildcats have seen matches the threat posed by Kaminsky, named the West Region’s most outstanding player after his 28-point, 11-rebound performance in Saturday’s overtime win against Arizona.

Even Kentucky coach John Calipari had to ponder his answer to the first question at Tuesday’s media session — about Kaminsky.

That’s because of how the 234-pound Kaminsky quietly positions himself to score from all over the floor for Wisconsin (30-7). He has a sleepy-eyed look, laid-back demeanor and doesn’t appear to be that mobile.

“We’re going to have to play him as a whole team,” Johnson said Tuesday. “He may not be as smooth, but he’s faster than he looks. We really have to do a great defensive job against him, not just individually but as a team.”

Kaminsky fits perfectly in Wisconsin’s deliberate offensive scheme, where he creates multiple dangers for defenders. Besides using his size near the rim for rebounds and second- chance baskets, he can slip out beyond the arc and burn teams who fail to account for him.

Against Arizona, Kaminsky made 3 of 5 long-range attempts and 11 of 20 from the field in the regional final.

Calipari said Kentucky will miss Cauley-Stein’s versatility with his ability to protect the rim and defend outside. He believes Johnson and Lee are up to the challenge of slowing down Kaminsky because of how both have played in the tournament.

Johnson has 23 points and nine rebounds the past two games. Lee came off the bench in Sunday’s Midwest Region final against Michigan and had 10 points and eight rebounds in 15 minutes.

Their efforts helped Kentucky reach the Final Four. To get to the title game, Johnson, Lee and Julius Randle must contain Kaminsky while keeping an eye on his Badger teammates.

“We just have to go out and play like we always do, just defend hard,” Lee said. “We can’t just one focus on one player because it’s the team, not one player that can win.”

Wisconsin coach Bo Ryan is driving a similar point home to his players when it comes to Kentucky’s talented freshmen. The Wildcats’ length, quickness and ability present matchup issues for his Badgers.

Ryan hopes Kaminsky can assert himself in a game Ryan believes might be decided in the paint.

“We know we have a couple guys that can score around the basket,” Ryan said Monday, “but we also know there are defenders out there that can do a pretty good job of stopping them. …

“The question will always be, how many touches, how many offensive opportunities on secondchance points will each team get? It will definitely be a battle 10 feet and in, that’s for sure.”