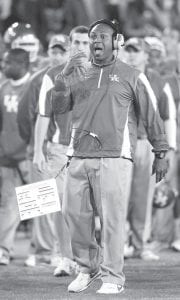 Kentucky coach Joker Phillips has a theory on what it will take for his defense to show up in the first half on Saturday against Georgia: Fruit.

“We usually eat orange slices” at halftime, Phillips said. “Maybe we’ll do that at the beginning of the game instead.”

Though the Wildcats (4-3, 1-3 Southeastern Conference) resurrected their season with a dramatic 31-28 victory over then-No. 10 South Carolina last weekend, they were forced to overcome an 18-point halftime deficit.

It’s not the ideal way to end a losing streak, yet it’s become routine for Kentucky since conference play began. Opponents are averaging 25 points in the first half over the last month, and punter sightings have been rare.

Auburn put up 31 points in the first half two weeks ago, scoring on all five possessions. South Carolina managed 28, a number that could have been worse if not for three turnovers — two of which came in Kentucky territory.

The defense is much better after halftime. Auburn scored just six points in the second half, including the game-winning field goal on the final play. South Carolina was shutout in the second half, looking lost at times after star running back Marcus Lattimore went down with an ankle injury.

Though the players would love to point to some sort of radical halftime adjustment or impassioned speeches for the turnaround, that’s not the case.

They’ll need to make them a little earlier on Saturday against improving Georgia (3-4, 2-3).

Despite a three-game losing streak to start conference play, the Wildcats aren’t out of the conversation for an SEC East title.

Lumpkin allows it’s “crazy” that all six teams in the division have at least two losses, but believes the Wildcats can still be a factor.

“It’s always going to be tight, but we can’t get caught looking ahead,” he said. “We know if we can win our last four games, we’re going to be right there.”

Getting off to better starts would certainly help the cause. Phillips believes if the Wildcats can get one stop, momentum will build.

“It’s like piranhas,” Phillips said. “Once you smell blood, everybody wants some. Somebody made a play in the second half (against South Carolina), a big play, and everybody wanted to make a play.”

Phillips was pleased with the attitude he saw from his players the morning after the first signature win of his tenure, though star Randall Cobb started a small firestorm when he tweeted his dissatisfaction with fans.

Cobb, who scored the gamewinning touchdown against the Gamecocks on a 24-yard pass from Mike Hartline with 1:15 remaining, chastised fans for being negative while the team trailed.

“Yeah I’m level 9 (upset) so deal (with) it!” wrote Cobb in a post on Sunday morning. He removed the post a short time later.

Phillips said he’ll likely review whether to allow his players to post on Twitter, but didn’t take Cobb to task for dropping his guard.

“Randall’s human,” Phillips said. “He’s 18, 20. You’ve got to understand how passionate (he is). It shows in his play. The guy is a passionate player, he loves his teammates, he loves this place.”