Cats in need of work 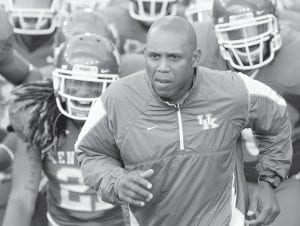 Joker Phillips is off to the best start by a first-year Kentucky coach since Bear Bryant won his first three games with the Wildcats in 1946.

And don’t think Phillips isn’t aware of it.

When asked this week if he knew whose mark he can match with a victory over Akron on Saturday, Phillips knowingly nodded his head.

Phillips couldn’t help but laugh about the odd coaching couple. Yet he hasn’t found much else to smile about despite his team’s 2-0 start. With a trip to No. 10 Florida looming in two weeks, the Wildcats are unbeaten, but hardly perfect.

While Kentucky has rarely been challenged during relatively easy victories over Louisville and Western Kentucky, the Wildcats aren’t exactly playing with the kind of fire Phillips knows they’ll need if they want to be taken seriously in the tough Southeastern Conference.

Poor tackling, shoddy kick coverage and a decided lack of intensity in the second half aren’t exactly ingredients for success.

“We’ve got to play for 60 minutes,” Phillips said. “We can’t have any letups, can’t give up any big plays.”

Yet the Wildcats have given them up with alarming frequency through the first two weeks.

Louisville’s Bilal Powell ripped off an 80-yard touchdown run in the season-opener. Western Kentucky’s Bobby Rainey went 59 yards for a score on the third play of the game last Saturday on his way to 184 yards.

Though Kentucky was never really threatened in the 63-28 romp, Rainey’s ability to get loose has Phillips concerned. The Wildcats are 94th in the country against the run two weeks into the season, giving up an average of 188.5 yards per game.

That’s well over the preseason goal of 110 yards rushing the defense set for itself.

“After the Louisville game, coming to Western Kentucky, that’s the one thing we said we’re going to stop doing is stop the run and we didn’t do it,” said defensive end Collins Ukwu.

Not by a long shot.

Rainey zipped untouched down the sidelines before the crowd at Commonwealth Stadium had settled into their seats.

The play seemed to get Kentucky’s attention. The Hilltoppers totaled just seven total yards on their next five series as the Wildcats ripped off 35 straight points to eventually build a 42-14 halftime lead.

Phillips found the stretch both encouraging and maddening. He was impressed with the speed the defense played at while shutting down the overmatched Hilltoppers. He was just as bothered by the fact the Wildcats couldn’t keep it up in the second half.

Part of the problem is experience. There was a considerable dropoff in the second half as Phillips went to his bench with regularity. That doesn’t exactly excuse the performance, however.

“Those are the things that are discouraging that our guys are relaxing,” he said. “That’s the thing we talked about at halftime: Let’s show how mature this football team has become in a week. We let up. We didn’t keep the pressure on.”

Phillips expected some growing pains while the defense tried to replace stars like defensive lineman Corey Peters and linebacker Micah Johnson. He emphasized playing physical during fall camp, trying to toughen up his players.

“One thing he’s not doing, he’s not pulling the trigger, what we call, going and attacking people,” Phillips said.

It’s something that’s become a problem throughout the defense.

“We’re not wrapping it up, we’re hitting way too high,” Phillips said. “Guys are carrying us for extra yardage.”

And those “guys” only figure to get faster and stronger as the Wildcats head into SEC play. They have one week to figure it out before traveling to play the Gators, where Kentucky hasn’t won since 1979.

“It’s just fundamentals,” Ukwu said. “Everybody has to get to the ball.”