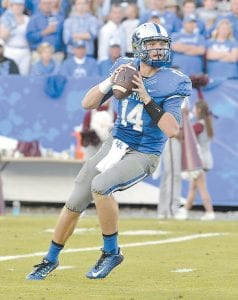 Kentucky quarterback Patrick Towles is seen in action during the second quarter of UK’s 45-31 loss to Mississippi State. (AP Photo)

The 2014 UK football season has obviously hit a wall, the Wildcats having lost two consecutive games — albeit to two top-25 teams — with the latest being No. 1 in college football.

Still you’ve got to like the fight and moxy in this team with the way they kept scratching, clawing, and batting the #1 team in the land coming off their first true beat down of the season at LSU.

Yes, they shot themselves in the foot all night and especially in the first half against Miss. State by dropping a couple passes, missing a couple wide open receivers, making a couple poor decisions once again with specialty teams play and several missed tackles on defense. It put them in a hole again at halftime but not so deep they couldn’t dig out and give them a chance to tie the game on three different possessions late in the third quarter and twice in the fourth quarter. The final score of 45-31 was no indication of the sequence of play going down the stretch run to end the game.

Mississippi State’s well- respected coach Dan Mullen said after the game: “This Kentucky team is a very dangerous team, I can see them winning a few more this year.”

The usual SEC gauntlet schedule continues on for the second half of the season at Missouri this Saturday (4 p.m. on SEC TV Network). The Tigers are coming off a 24-14 win over Vandy with an impressive 6-2 record overall and 3-1 in the SEC East. The two Mizzou losses came to a very ordinary 3-4 Indiana team 31-27 and a shutout 34-0 shutout at Georgia 34-0 even though the Bulldogs were without their star running back Todd Gurley. Some longtime Wildcat football followers I’ve spoken to in recent days think this is UK’s best chance at a road win. Not me. I still think Knoxville and Louisville still hold the best opportunity for that coveted sixth win for bowl eligibility.

Only time will tell how it all plays out, but I’m getting more excited each week for the future of this starving-for-success football program and the Mark Stoops era.

John Calipari’s new “Blue Patoon” system of playing hoops begins its exhibition season this coming Sunday (November 2 at 7 p.m. on the SEC TV Network) and it appears to be as exciting and successful as any season has been since Coach Cal arrived in Lexington with this one possibly bringing more anticipation to “Big Blue Nation” than any of the previous five.

With a team finally composed of experienced juniors and seasoned sophomores as well as the usual mega talented incoming freshman class that has a startling sum of nine McDonald’s All- Americans on the roster, one has to think even at UK this could be a team and season that could be special even in the annals of this historic program.

Basically, the only record that UK doesn’t hold is the one most coveted by BBN and that is the most NCAA championships. UCLA leads with 11. There is no doubt in the entire Commonwealth of Kentucky that this team has its sights set on earning the Cats’ ninth NCAA championship next March, putting them within two of tying the record.

But first things first, because as Coach Cal says there is a process each team must plow through and it starts with the exhibition season the next two Sundays, for now the last remaining scrimmage between the mega talented UK roster will take place (Mon.) Oct. 27 (7:00 Live On SEC TV Network) then the “Blue Patoon” system will be revealed for the first time to all and the hunt is on for NCAA championship No. 9.

Beginning this week Julius Randle and James Young will be the latest former UK hoop stars to begin their pay-for-play careers in the NBA.

John Wall’s Washington Wizards team opened a few eyes late last season and is expected to make an even deeper run in the playoffs this year. And Anthony Davis is definitely building an NBA resume that has him on a timeline to be in several NBA All- Star games down the road. Eric Bledsoe and DeMarcus Cousins are becoming go-to players for their teams and both just signed new maximum contracts that will pretty much set them up for a comfortable life from now on.

Listed below are UK’s highest ranked players with the deepest pocket books for the 2014-15 season. The information comes from NBA link on www.espn.com through NBA media services.

The dollar amount listed after each player is sole salary for this upcoming 2014-15 NBA season: