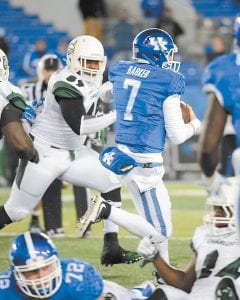 Quarterback Drew Barker says players have “learned to work as a team” and are more united this season. (Vicky Graff Photo)

No one wanted to talk about any internal problems on the Kentucky football team last year. Never mind that the issues seemed obvious to almost everyone.

During preseason camp this month, a few players have hinted that this year’s team is far more united.

Quarterback Drew Barker, who started the final two games last season, said there was “no doubt” the team was more united and had more purpose. He credits new offensive coordinator Eddie Gran for much of that on the offensive side.

“Coach Gran, the first thing he said in our first summer meeting is we are doing everything as a team. We are not using I, me. We are only using us. Everyone has to be involved. Everyone has to be there. We have to learn how to work as a team. Even in the spring we took big steps forward,” Barker said. “He’s not going to accept anything but united.”

That seems obvious with the receivers, who had a major disconnect it seemed with offensive coordinator Shannon Dawson last year. New receivers coach Lamar Thomas has a playful side, but is also a no-nonsense coach on the field.

“I think the biggest thing with them is their attitude. They are attacking and staying after practice and catching balls. I think they will have a big year,” Barker said. “They have all the talent in the world. They just have to put their mind to it. Coach Thomas and coach Gran have really changed their attitude and picked them up.”

But the pressure is still on Barker. Two older quarterbacks — Patrick Towles and Reese Phillips — transferred after last season ended. Coach Mark Stoops has never wavered in making it clear this is Barker’s team to lead.

“Yeah, it has been like that for a while with the pressure. I am looking forward to it and embracing it,” Barker said. “I can’t wait to get out there and hopefully all the work we are putting in pays off. You can’t play quarterback without pressure. If you cannot handle the pressure, you might as well stay home.”

True. But it also takes more than a quarterback making plays in the fourth quarter for a team to win close games and be successful. In recent years, Kentucky has not been able to make those plays when it had chances to win close games.

“It definitely is hard in college to make those plays. The players are so much better, but you have to put in the time, the film study. Just making plays is not going to happen out of the blue,” Barker said. “You really have to dedicate yourself to doing stuff longer and with the receivers. If you doing that, it will pay off and if everybody is doing that, stuff will pay off in the season.”

Did you ever wonder how Kentucky junior receiver Garrett “Juice” Johnson got his nickname? I did, so I finally asked Johnson — UK’s top receiver last year with 55 catches.

“In between high school and UK, I got the name. After my senior season, coming up here, that is how it started,” Johnson said. “I can’t really remember how it started, but once it did it just took off. I love Juice Johnson, too.”

He says sometimes even his mother calls him Juice.

“She slips up and calls me Juice, too, and that makes me laugh,” he said.

It’s a long way from Florida to Kentucky, but Johnson has no regrets about his college choice and says he gets happier every year he’s at UK.

“Everything happens for a reason. I feel like that choice was the right choice and just me coming up here, I have really grown up. It made me be more my own man. Made me become smarter,” he said. “Home is a 14-hour drive away. So it’s just me and maybe a phone call home.

“That takes a little toll on you as a kid, but when I call back home the only person I talk to is my mom or dad and they are rooting for me. That makes it easier to have that support back home and they are up here a lot to make sure I have everything I need.”

Cole Mosier is now a 335-pound junior offensive tackle at Kentucky and likely will be in the starting lineup when UK plays Southern Mississippi Sept. 3 to open the season. Not bad for a former walkon lineman from Walton-Verona.

But while his story from walk- on to scholarship player to potential starter has been well documented, did you know he was a punter in high school.

“I was actually pretty good. Coach didn’t want me to punt our senior year but we didn’t really have anybody, so I said I would try and he let me. I punted pretty far and I had it. We actually worked on a fake punt, but I never got to run it,” he said.

He says sometimes he still tries to kick the ball a bit at UK. Junior offensive guard Nick Haynes does, too.

“He thinks he can beat me out in punting, but he can’t. He gets close, but not really. He can’t beat me,” Mosier said.

What does Haynes, who lives in the same house as Mosier, say?

“I can beat him any time. When it comes to punting, I feel like last year I moved my game to another level. Cole punted in high school and had some experience on me, but raw talent and athleticism I beat him out there. I am a far better punter than he is and when it comes to coverage, I make tackles,” Haynes said.

“If me and Cole are on the 10- yard line punting, I would get 7-8 yards on him every time. My hang time, there is no punt returns. That’s my thing.”

Could he punt for UK?

It’s even more bizarre to think that he was also a high school tennis player.

“When I was a senior I was like, ‘I don’t have anything left, so I might as well try to play tennis.’ The tennis coach said I was pretty athletic, so why not,” Mosier said. “I played and this younger guy on our team was really good and it would drive me nuts. I would go play the net and try to spike it on him and he would position around me and not hit it hard and beat me every time.”

He said his dad was a tennis star in Ohio where Mosier was born.

“He just laughs at the talk of me trying to play tennis. He knows I can’t. I might be able to get him now, though, that he is older but I doubt it. I was not that good,” Mosier said.

Hamidou Diallo has been at Putnam (CT.) Science Academy for two years and coach Tom Espinosa says it is clear the 6-5 guard values winning more than scoring. “He’s so talented and could score a lot more if he wanted,” the coach said. “He has a very high basketball IQ and is very, very aggressive on the court.”

If Diallo has a weakness, it could be that sometimes he gets too passionate on the court. Espinosa says he has matured both on and off the court.

“We have butted heads a lot, but he has really matured a lot. He still needs more,” Espinosa said. “He has done some unfortunate things on the court.”

“By unfortunate things I mean he will have four fouls and reach in and get a fifth foul and get all mad,” Espinosa said. “Stuff like that he is still learning. He wants to make the big steal, big play. I tell him he just has to learn to pick his battles.”

Espinosa says having too much passion on the court is a nice problem. Certainly Kentucky coach Calipari, who has made Diallo a major recruiting target, would agree.

“It’s not easy to light a fire under a player who plays with too little passion,” Espinosa said. “I will take too much passion every day and work to help him learn how to control that because you cannot coach the passion he has.”

He has numerous scholarship offers, including Duke, Kansas and Connecticut along with Kentucky, and has not indicated when he might make a college choice. Most recruiting analysts have thought UConn could have the lead at various times, but Diallo insists he’s in no rush to make a commitment.

“I feel like he can read things. The first two years at UK, if you go back and watch you will see him on the sidelines and he knows everything that is going on and what is really going to happen. He really knows his basketball just like he does his cards,” said Keely Potts, Willis’s girlfriend.

His competitive nature does not stop there.

“Even with rock, paper, scissors and stuff like that, he likes it all and wants to win,” she said.

Potts recalled a beach vacation trip where her great aunt and uncle went to a Pilates class and they went along with them.

“Derek went on the opposite side of me and got so into this class. It was a lot of older women and it was like this white-haired woman was bending like crazy and Derek was getting so frustrated because she was so flexible compared to him,” Potts said. “He kept asking how this woman could do all this and he couldn’t. He kept trying and stayed after a little bit and worked on it. He puts his heart into everything he does.”

First, he thinks going against cornerbacks Chris Westry and Derrick Baity daily in practice has to help UK’s receivers. Westry and Baity are the main reasons many consider UK’s secondary the best in the SEC.

“To have the secondary that we have, to go against every single day and how good they are – and I know they have their moments where they need to get better, but they’re really, really good, and they force our receivers to get better. And that’s huge,” Hinshaw said. “What we’re going against, we’re going to see in the SEC all year because it’s a really good secondary, so it really helps us a lot.”

Second, he’s indicating that Kentucky will throw the ball more to running backs this year. That’s something Hal Mumme’s offense did frequently and so did former UK coach Rich Brooks. Hinshaw says in his 17-year coaching career, he’s never had quarterbacks understand better how to “check down” to running backs on passing plays.

“We’ve thrown it to the running backs more here (in practice) than I ever have, and I’m really proud of ’em. That’s what we have to do on Saturdays, we’ve got to check it down when the defense covers routes,” Hinshaw said. “They’re not going to be all open all the time, and throwing the ball away and checking down, we’ve done a really good job and we’ve got to continue to do that.”