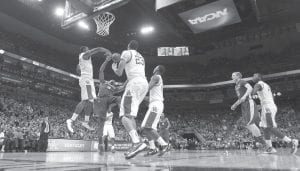 The last time Kentucky and Indiana met up it was in the hostile and revengeminded confines of Assembly Hall in Bloomington, Ind., when the Hoosiers hit a three-pointer at the buzzer to give the Cats their lone defeat of the 2011-12 regular season.

This time it will be for all the marbles and the match up will take place in the Georgia Dome (Rupp Arena South) in the middle of “Catlanta,” home to UK’s largest alumni base outside of the Commonwealth.

Revenge motive this time goes to the youthful Wildcats with an assist to the good folks at ESPN for making sure the free world hasn’t forgotten the first game by showing that final shot more times than they have commercial space for. It will be interesting to if CBS jumps on the bandwagon. Load it up, guys. Every time former IU recruit Marquis Teague and his Kentucky teammates see it this week should raise the mental and emotional meter to newer heights.

It was obvious from the time UK rolled into Bloomington in December that the Hoosiers went out of their way to give Teague, the freshman point guard, a traitor’s welcome. I’m guessing the Indiana faithful felt a double dose of hatred since Indianapolisnative Teague had originally committed verbally to Coach Rick Pitino’s Louisville Cardinals before Coach John Calipari swooped in to lure Teague’s talented services for however long he is in the college ranks.

It’s no secret Calipari and IU Coach Tom Crean are big buddies and really don’t like playing each other. But when you meet up in this situation, friendship must be put on the back burner — and it will. I would have liked Kentucky’s chances anywhere and at any time in this second matchup, but it being an NCAA tournament elimination game and in Atlanta — and with Calipari having a week to tweak his offensive sets and other game planning — I really like the Cats’ chances. Barring an unreal clunker in perimeter shooting by the Cats I see a 10-12 point Kentucky win.

Both teams are playing at a higher level at this point in the season, but IU no longer has the services of senior guard Verdell Jones III because of a season-ending injury. Jones was one of the Hoosiers’ key players in the December upset of the No. 1-ranked Cats. Jones was fourth on the team in minutes played with 27 plus per game and averaged 8.1 points and 3.9 assists per game before he went down.

Tipoff in the Georgia Dome is set for 9:45 p.m. Friday. The game will air live on CBS.

Cal’s boys not only story

Matthew Mitchell’s female hoopsters at UK are off and running on their own March Madness track, having conquered their second- round opponent Wisconsin-Green Bay Monday night, 65-62, to slip into the NCAA Tournament’s Sweet 16.

Not to be outdone over on the other side of campus at Cliff Hagan Stadium, Gary Henderson’s UK baseball team just swept a threegame series from two-time defending national champion South Carolina. UK (21-0) is now ranked No. 2 behind Florida in the Collegiate Baseball poll and has entered the Baseball America rankings for the first time at No. 16.

Ira Combs lives at Jeff in Perry County, where he operates Tri-State Sports with his brother Harold.