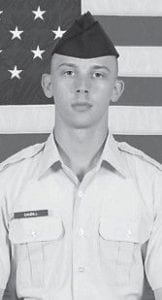 Caudill earned distinction as an honor graduate. He is the son of Judy Caudill of Cassell C. Branch, and Timothy Caudill of Blackey. He is a 2008 graduate of Letcher County Central High School.