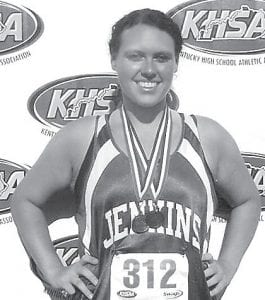 Blake Caudill became the five time Class A, Region 7 champion in the shot put and discus throw. She competed at the KHSAA Regional Track and Field Championship held in Ashland in early May, placing 1st in both events. Caudill then competed at the KHSAA State Track and Field Championship in Louisville on May 17, placing 6th out of 24 competitors in both events.