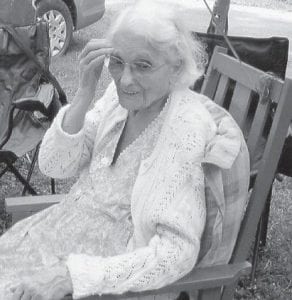 BIRTHDAY — Grace Caudill of Blackey celebrated her 94th birthday August 10. Present in addition to her children and grandchildren were her sister Bertha Hall and husband Jim and their son David Hall from Indiana, and her sister Jessie Hampton of Doty Creek. Mrs. Caudill lives in her home and cares for herself most of the time. She was the Blackey correspondent for The Mountain Eagle for 15 years.

The annual Caudill memorial service will be held at Red Star on Saturday, August 22, starting at 5 p.m. Everyone is welcome and please bring a covered dish.

Happy birthday to Crystal Frazier of Linefork. It is on August 22.

Doyle Dean Johnson of Jeremiah went to Lexington last week and had surgery last Wednesday on his neck. It went OK and he is home but there will be further tests to make sure whether or not it is cancer.

Happy birthday to my niece Jessica Dixon of Elk Creek. It’s on August 23, and my nephew Gary Fugate of Carcassonne has one on August 29.

Happy birthday to Brayden Walker Fields of Whitesburg. He turned three on July 21. He is the son of Brandi Amburgey and Brandon Fields, and his grandparents are Jerry and Linda Amburgey and Paul and Nancy Fields. He has a baby brother, Jerry.

Happy birthday to Shelly Smith of Letcher. It was on July 29. The birthday of Allen Fugate of Blackey was also on July 29.

Sylvania Whitaker of Blair Branch had to go back to Lexington to the hospital. She has had a kidney transplant and is having problems with it. I wish her the best. She has been in and out of the hospital for awhile now.

Lois Smith of Caudills Branch had to be taken to the emergency room on Thursday, then she was taken on to Pikeville Hospital. I think they said she was having problems with her kidneys and was not doing well. I hope she comes through OK.

Josephine Holcomb of Isom is in the hospital. She had a stroke and last I heard of she was not doing well.

Happy birthday to Erin Gibson of London. It’s on July 26. She is the daughter of Cyndi Heldt and George Gibson, and her grandparents are Danny and Von Hall of Blackey.

Happy birthday to Tyler Rowe of Caudills Branch. He was 14 on August 17. He is the son of Randall and Rosemary Rowe.

I have a lot of birthdays this week. Happy birthday to Dalton Couch who turned four on July 19. His brother Bailey will be eight on August 21. They are the children of Michael and Alana Jo Whitaker Couch of Jeremiah. They are having a party for both boys on August 22.