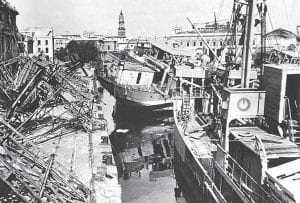 When young soldier Harry M. Caudill and his unit were assigned to Naples, Italy in World War II, they were greeted with wreckage of ships and harbour installations that remained after the Germans gave way to the Allied advance. Some of the wrecked ships in the harbour had been scuttled, others sunk or damaged by Allied bombing. (AP Photo)

Late author, attorney and former state representative Harry M. Caudill wrote a series of reports from the front lines of World War II for The Mountain Eagle in 1944. The articles represent some of the first published writings for the author of “Night Comes to the Cumberlands.”

In the latter part of March my division was moved to Italy. I crossed the Mediterranean Sea on an eight thousand ton American troop transport, which prior to the war was used to carry bananas from Panama to the states.

Few of us became seasick during the Atlantic crossing, but I was only one of many who became violently ill on the way from Algeria to Italy. The ship did not pitch and toss, but was kept in constant motion by low waves which rolled constantly before the wind. Our Atlantic crossing was made on a vessel nearly four times as large and as a consequence it was little affected by rough seas.

The last glimpse I caught of Africa was of the low barren hills, which in Tunisia come down almost to the shore. For hours before our convoy turned toward the north I stood by the rail (one is usually seasick only while he is below deck and feels much better upon coming into the fresh air) and watched them pass into the distance. In Africa, the French Colonial Forces keep native soldiers or Foreign Legion troops on guard at bridges and at intervals along telegraph lines and railways. Little stone forts dot the countryside from which soldiers keep the surrounding areas under constant vigilance.

The Arabs are a wild, strange people and the desolate sandy hills that make up most of their African territories are as inhospitable and forbidding as the Arabs themselves.

My regiment disembarked at Naples, or “Napoli” as the Italians call it. Naples is the only major Italian city that I had an opportunity to visit. Ten days after I arrived in Italy I received a one-day pass to the city, which enabled me to see only enough for it to make me want to see much more. Presently I will describe some of the things I saw there in villages to the North.

We left the troop transport carrying full field equipment and marched directly to the railroad station, “ Piazza Garibaldi.” From here we travelled by train a number of miles to a small village north of the city. From here we took a three-hour march to a small valley, where we camped for the three following days and nights. Upon leaving this valley we moved in trucks to a rest area some twenty-odd miles behind the front lines.

We stayed here two weeks loafing — resting in anticipation of combat; then at 11:00 o’clock at night we moved in lightless trucks to the battlefront.

I have mentioned the stages by which we moved to the battlefront in order that the reader may gain some idea of the usual manner in which troops are moved into the battle lines.

Because there are many millions of American citizens who were born in Italy or are directly descended from Italian immigrants, Italy is a country of particular interest to us. If I had been allowed to choose any country in Europe where I might serve as a soldier, none would have been of greater interest to me than Italy. The history of western civilization has, in large measure, been a history of the inhabitants of the Italian peninsula. When England and Germany were yet savage wilderness and America an unheard of wild continent, a majestic civilization flourished in Italy and Rome was the Capital City of the western world. As a result of her long history, one can hardly turn around in Italy without encountering something of particular interest to all of us.

In the harbor area at Naples I saw for the first time the ruin and devastation that war leaves behind. No place that I saw in Africa had suffered serious damage, but from the time I entered Italy until I left it I saw everywhere destruction which we in America find difficult to imagine. Naples is one of the largest, and normally one of the most prosperous port cities in Europe. Italy imports a large percent of its foodstuffs and nearly all of its industrial raw material, and yearly hun- dreds of cargo and passenger ships from all over the world used to dock there. Our war department has estimated recently, however, that it will be several years before the great port can possibly be restored to its pre-war capacity.

Germans and Italian Fascist demolitionists did most of the damage to the harbor trying to ruin the port so badly that the U.S. Army could not bring in supplies through it. Great ships, burned out and half-covered with water, dot the harbor. Here and there in deep water, only the top of a mast sticks out while in other cases the decks are barely covered with water. The docks, wharves and warehouses were dynamited into the water and have been hastily replaced by American engineers with crude emergency installations.

Whole rows of buildings along the waterfront are in rubble and here and there hastily built concrete air raid shelters stand by the streets or amid the ruins of buildings. The people, driven out of this section of the city, live literally anywhere that shelter can be obtained.

Some families even live in the railroad depot, in impoverished rooms between the high ceiling and the roof.

Destitution and the most abject poverty are everywhere in Naples and the other ports of Italy that I saw. It is little wonder that the Italians are sick of war!