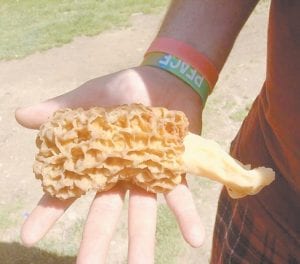 Justin Combs of Blackey, found this dryland fish, which is 7 inches long. He and his family have found and fried over 200 dryland fish this year, the most they have found in years.

Tara Couch of Linefork got to come home from Lexington recently then was taken back to the WARH emergency room one night. She is still sick, but she is home now and doing better. Hopefully she will keep improving. Her mom Dena had to be taken to the hospital. She was having problems with her back. I wish her the best.

Happy anniversary to Matt and Reanna Caudill of Jeremiah. It was their 22nd on April 22.Happy birthday to Matt. It was on the 24th.

My sympathy to the family of Bill Caudill of Blackey. He died on April 23rd. Bill had cancer and had been sick for awhile. My heart goes out to the family. Bill just recently lost his mother, Grace Caudill of Elk Creek. Bill was 70.

Late happy birthday wishes to Courtney Hayes of Elk Creek. She turned 9 on April 16th. She is the daughter of Jeremy and Nadean Hayes.

Cindy Williams of Blackey also had a birthday on the 16th, Terry Bolling of Bull Creek on the 15th, Dena Couch of Linefork and Tim Madden of Crases Branch on April 17, Tammy Caudill of Red Star on the 21st, Rhonda Fields of northern Kentucky on the 25th, and Winford Eldridge of Blackey also on the 25th.

My sympathy for Bruner Caudill family of Linefork. He died April 28th at Pikeville hospital.

Ronnie Miller of Blackey is home now. He is using a wheelchair right now. He had swelling in his spine and can’t walk, but I’m sure he will be out of it as soon as he can. I’m glad he is doing better and home.

Doris Ann Dixon of Letcher is still in the University of Kentucky Hospital in Lexington. She fell recently and hit her head on a door and had to be flown down. She broke some bones in her neck. She is still not doing too well. I wish her the best.

My son Justin found a 7-inch dryland fish recently. It was the biggest we have found in a long time. We have found over 200 this year. This has been a good year for us. Sometimes they are hard to find.