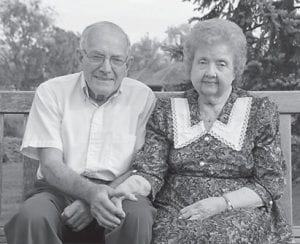 Paul and Cora Sue Caudill will celebrate their 65th wedding anniversary on July 31. The Caudills were honored July 20 with a surprise party given by their children in Kettering, Ohio.

The couple were married by a barber at a dentist’s office in Hazard on July 31, 1948, At the time of their marriage, he was 20 years old and she was 15 years old. Both were born and reared on Doty Creek.

He was employed by Wardrup’s Packing in Blackey, and Jewelridge Coal Company in Leatherwood. She worked at Head Start in Blackey and at Letcher Manufacturing in Isom. They moved to Ohio in December 1964. He was retired in 1993 from Monarch Marking Company and she sold Avon Products until she became disabled.