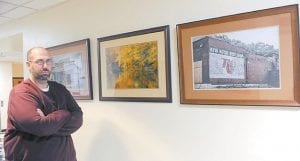 Mitch Caudill recently won the top two prizes in a photography contest sponsored by Pikeville Medical Center. Caudill is a Whitesburg native and a library specialist at Southeast Kentucky Community and Technical College.

Mitch Caudill has parlayed a passion for photography turning his work into award- winning art. Largely self-taught, buying his first “good” camera six years ago, the Whitesburg native and library specialist at Southeast Kentucky Community and Technical College, has become a producer of award-winning images.

Recently, he received news that two of his photographs won top prize in a competition sponsored by Pikeville Medical Center. In the contest, in which 1,500 photographs were entered, Caudill winning the President’s Award and the Best of the United States category. One of his work depicts shafts of golden and gauzy light spreading high above the steeple of the Meta Baptist Church; his other winner is an image of a rushing stream, frozen in time by a slow shutter speed, on a section of creek leading to Little Stoney Falls near Coeburn, Va.

Eleven works by regional photographers were winners and will be enlarged, printed and framed by PMC. They will decorate the walls of the hospital’s new clinic.

“It is such an honor to have my work chosen by the committee,” Caudill said. “While I always enjoyed looking at photos, it was not until my interest was piqued while watching TV crime scene investigator programs. They used sophisticated cameras as they worked to solve crimes. I wanted one of those and went out and bought a Nikon and a lens.”

Today, he has moved up” to the Nikon D- 300S and has acquired six lenses for his photographic arsenal. Caudill’s services are increasingly in demand as he works various free-lance jobs —Little League sports, weddings, portraiture, all the while snapping images of the unique beauty found within the central Appalachian Mountains. When he is not working his job in the Mary Bingham Library at the SKCTC Whitesburg campus, with camera in hand, he searches out locations and the subjects that lend themselves to his definitive style. “As I grow as a photographer I seem to enjoy it even more,” he noted.

Several of his photographs have begun to adorn the walls of the college’s library and in the central foyer of Caudill Hall. Whitesburg campus director Debbie Young says Caudill’s work deserves to be viewed and appreciated. “Mitch is an artist,” she said. “I am glad several of his photos are displayed at our school, they unquestionably add much to the overall atmosphere of our campus.” Recently, five prints, sized at 16 inches by 24 inches and framed and matted, have been placed at the site. Additional prints are expected to be added soon.

Seemingly in search of new areas to explore, he mentioned that he wishes to soon begin trying his hand at photographing the constellations. Astrophotography is an area Caudill hopes to master.