Caution: Black bears on the move 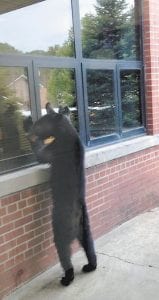 This photo of a black bear looking through a window at Fleming-Neon Middle School last Thursday is being circulated on Facebook. The bear left its paw prints on the cafeteria windows.

With black bears on the move, Letcher County residents should think twice about leaving garbage, pet food and scraps outside.

“Remove the food, you remove the bear,” said Jayson Plaxico, a biologist with Kentucky Department of Fish and Wildlife Resources. “If the underlying problem isn’t taken care of, the bear will come back or a new bear will take its place.”

Some bears sneak into a neighborhood in the middle of the night and rummage through garbage cans looking for something to eat. Homeowners find trash in the morning strewn across yards and driveways, but don’t usually see the bear.

“Bears learn the garbage pickup route,” said Plaxico. “Put your food up, the bears leave. This is a temporary problem, but it lasts from March through July. When the natural foods are there it isn’t a problem.”

Plaxico said nighttime bears aren’t going to be around people. Other bears have been spotted in broad daylight Dumpster diving.

“It all comes back to the food source,” said Plaxico.

A yearling standing on its hind legs looked inside a cafeteria window at Fleming-Neon Elementary School May 28. Plaxico said usually when a bear looks at a window, the bear is looking at its reflection.

All the students were secured inside the school building taking statewide tests, said FNMS Principal Gracie Maggard, and only a few children saw the bear. The bear hasn’t been back to the school again. “We’re hoping it was just an isolated event.”

The school left the bear’s paw prints on the window for a day so the children could see them.

“Its face was so close to the window that I think it was actually looking inside,” Plaxico said. “I think it has been allowed to be comfortable around houses.”

Plaxico said he doesn’t consider this to be normal bear behavior and if the bear continues to show up on school grounds state wildlife officials will try to relocate the bear.

“Bears don’t just show up one day and look in the window,” he said. “They have to be conditioned. That bear has learned that somewhere.”

Bears also made an appearance last week at Arlie Boggs Elementary School. A fence is located around the school Dumpsters, but Plaxico said garbage bags were left sitting near the Dumpster and it didn’t take bears long to find the garbage.

“At any given time there are 20 or more bears within a mile of Arlie Boggs Elementary School,” he said. “You could probably say that about Whitesburg.”

Plaxico said Mayking and Eolia residents shouldn’t be surprised to see a bear every day from April through July.

“The bears they see live here,” he said. “Once you see a female bear with cubs, you have bears. This time of year you will see them travel.”

“These large males looking for females may go 250 square miles,” he said.

Plaxico said 313 nuisance or observation reports from Letcher County have been received from 2012 to 2015, compared to 388 in Harlan County and 122 in Pike County.

As of May 31, 40 nuisance reports from Letcher County have been entered into the database. In 2014, 86 complaints were documented. Plaxico said human and bear interactions are probably much higher because many people never report issues with bears.

Most of the bear complaints Fish and Wildlife officials have received from Letcher County residents so far in 2015 are from the Whitesburg area.

“It’s a matter of people getting used to the bears being around,” said Plaxico. “They are here to stay. If folks from Virginia and Tennessee can live with growing bear populations, we can too.”

Plaxico recommends that people store garbage in outside storage buildings or garages until garbage pickup day. Old oil drums or freezers with latches can be used as storage devices.

Put birdfeeders up after dark. Don’t leave pet food or scraps in yard or on porch. Put out only the amount of food a pet can eat.

“Our number one goal is to not have bears on porches,” said Plaxico. “We don’t want bears in neighborhoods.”

“It babysits your bees while you are sleeping,” he said.

While bears getting into garbage is a common complaint, Plaxico said in order for wildlife officials to capture a bear it needs to do more than get into garbage. “Trapping a bear is usually a last resort and takes place only after folks try our standard recommendations — what we know that works— and find no success,” he said. “Even then, we aren’t always successful when trapping. It is usually easier and quicker to simply bear proof your property.”

As long as people don’t remove food sources, Plaxico said there isn’t a place the bear can be relocated that it won’t come back.

“If you have 30 do the right thing and two not, it still creates a problem for the neighborhood,” he said.

Most bears in eastern Kentucky are located in Harlan, Letcher and Pike counties, Plaxico said.

“The bears are here and they are increasing in number,” he said. “They are becoming more prevalent.”