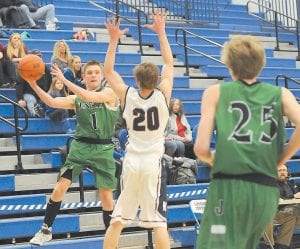 Jenkins’ Austin Boggs looked around a Knott Central defender as he put the ball back into play to teammate Jeffrey Newsome during Monday’s district tournament loss to the Patriots. Boggs was the Cavaliers’ leading scorer in the loss, dropping in nine points. Newsome had four points. (Photo by Chris Anderson)