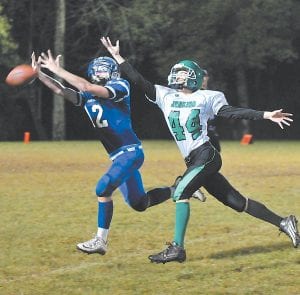 This win was a long time coming for Jenkins.

Running back Audie Fields scored a pair of fourth-quarter touchdowns to put away Phelps as the Cavaliers spoiled homecoming with a 42-20 win in a game played at Johns Creek on October 1.

The victory snapped a 10-game losing streak for Jenkins, which played to a 0-0 score against the Hornets in a game called because of lightning in the 2014 season opener.

Jenkins quarterback Darian Slone hit receiver Nate Bates with a 27-yard touchdown pass with 1:05 left in the quarter to pull the Cavaliers even at 6-all.

The Cavaliers took the lead for good when Bates hauled in a 79- yard touchdown pass from Slone with 9:19 left before the halftime break. Slone’s two-point conversion run made it 14-6.

Phelps closed to within two late in the second period following a Jenkins turnover.

Quarterback Cory Stump tossed a 39-yard touchdown pass to tight end Matt Hatfield to make it 14-12 with 35 seconds left in the quarter.

Jenkins pushed its lead to 26-12 after three periods on a three-yard touchdown run by Josh Delph with 7:55 to go and Slone’s oneyard keeper with 4:20 remaining.

The Hornets fought back to close to within 26-20 on running back Dalton Prater’s seven-yard pass play from Stump with 9:49 left to play in the game. Prater added the conversion run.

Jenkins put the game out of reach as Fields ran 40 yards for a touchdown with 7:53 left to play. Slone’s conversion run made it 34- 20. Fields capped the scoring with a 43-yard run with 6:12 remaining. John Holyfield’s two-point conversion run was good.

Both teams return to action on October 9 as the Cavaliers host South Floyd (2-4) and Phelps welcomes Hazard (5-1) to JCE Field.