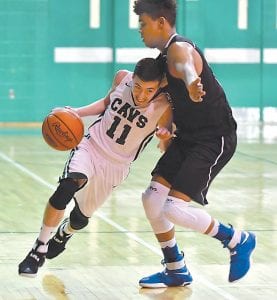 Hunter Adams bumped his way around a June Buchanan defender during the Jenkins Cavaliers’ 75-69 win Monday night over the visiting Crusaders. Adams scored three points in the victory, the third for the Cavaliers this season and the second straight for the Jenkins boys’ team, which defeated Rose Hill Christian Saturday, 70-51. The Cavs, now 3-20 on the season, hosted the Piarist School Tuesday night. (Photo by Chris Anderson) 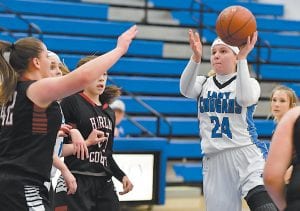 LCC GIRLS DROP TWO — Letcher Central’s Shelby Hall drove to the basket in the Lady Cougars’ 67-56 loss to Harlan County on Monday night. Hall led all scorers with 25 points. Entering Tuesday night’s game at Cordia, LCC had a won-loss record of 15-11, including a 60-40 loss to 53rd District and 14th Region power Knott County Central on February 4. The Lady Cougars are scheduled to host Shelby Valley on Saturday for a 3:30 p.m. tipoff. (Photo by Chris Anderson)