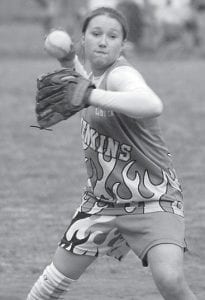 Jenkins shortstop Emily Walker got set to throw the ball to first for the out during her team’s win over Letcher Central last week. The Lady Cavs have advanced to the second round of the regional tourney.

The Jenkins Lady Cavaliers softball team will face Estill County tonight (Wednesday) in the second round of the regional tournament in Hazard.

The Lady Cavs, fresh off a district championship win over Letcher County Central, advanced to tonight’s game by posting a 5-2 victory over Leslie County on Monday.

Letcher Central fell in the first round Monday to Hazard, 7-6. The Lady Cougars scored five runs in the top of the 7th inning to take the lead 6-2, but lost the lead – and the game – in the bottom half of the inning.

The Lady Cavs also have players like shortstop Emily Walker, whose leadoff single paved the way for their first run in the title game against Letcher Central. Walker advanced to second on Rachel Thacker’s sacrifice bunt and to third on a ground out by Hillary Brashear. Walker scored on Whitney Gibson’s RBI single to left field. 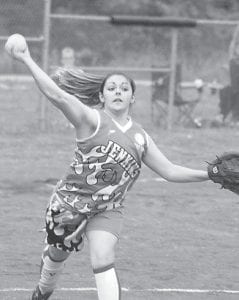 Lady Cavalier pitcher Rachel Thacker fired the ball to first after a grounder was hit back to the mound in last week’s district title game.

After Thacker the Lady Cougars in order, Jenkins applied pressure again in the top of the second. Taishia Hall drew a walk and advanced to third on Ashley Taylor’s single to right field, then scored on Kayla Stambaugh’s infield hit to short. Stambaugh’s hit also advanced Ashley Taylor to third. Taylor then scored on Emily Walker’s sacrifice fly to center.

The Lady Cavs increased their lead to 5-0 in the top of the third, but Letcher Central’s bats awakened. Melanie Watts led off the inning with a single to right. Her courtesy runner advanced to second on a passed ball and later scored on Takiah Caudill’s hard line-drive single to left. Caudill advanced to third on a fielding error, then scored on Lindsay Hart’s sacrifice fly to left field to make the score 5-2.

After that, LCC pitcher Ramie Adams helped herself out at the plate. After driving the ball to left for a single and reaching second on an error, Adams scored on Heather Hatton’s base hit to center. Hatton was thrown out by Jenkins catcher Hillary Brashear while trying to advance to second, but the damage had been done and the Jenkins lead was cut to 5-3.

After the Lady Cavs were retired in order in the 4th inning, the Lady Cougars came up to bat with a newfound confidence. Chloe Wynn started the inning by drawing a walk, then moved to third when Courtney Johnson drove a double to the fence in centerfield. With one out and two runners in scoring position, Melanie Watts grounded out to second, scoring Wynn. Leadoff hitter Takiah Caudill then singled to left, driving in Johnson to tie the game at 5.

The Lady Cougars’ momentum was halted when lightning forced a 35-minute delay at the top of the 5th inning. Pitcher Ramie Adams did manage to make quick work of the Lady Cavs, who were unable to hit the ball out of the infield, but could do no further damage in the bottom of the 5th inning.

Ashley Taylor led off the top of the 6th inning for Jenkins and reached base on an error. Taylor was sacrificed to second by Kayla Stambaugh, then reached third on Ali Goff’s ground out to the pitcher. Emily Walker was then able to muster her second base hit of the evening, driving the ball to right field and scoring Taylor to give the Lady Cavs a 6-5 lead.

Jenkins was able to hold the lead – and win its first district championship in seven years – when Letcher Central’s final three batters struck out in the bottom of the 7th.