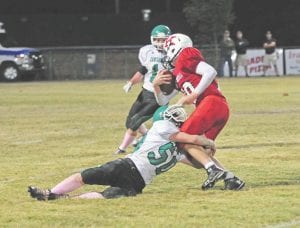 The Jenkins Cavaliers were on the road last weekend as they traveled to Knott County Central to take on the Patriots. Coach Daniel Sexton and the Cavaliers were coming off of a bye week and hungry for their first win of the season.

The Patriots opened the game with an onside kick, which they recovered for first possession of the game. Knott County scored first, on the second possession of the opening drive, by capitalizing on a slow start of the Cavalier defense. After a successful two-point conversion the Patriots led 8-0.

The Cavalier offense took the field and the improved play of the offensive line was apparent. Quarterback Randy Potter marched his team down the field using his arsenal of offensive weapons led by running backs Andrew Oliver and Audie Fields to put the Cavaliers in scoring position. The drive was capped by a 15-yard pass completion from Potter to Coty Wright for the touchdown, but Jenkins failed to convert the extra point, leaving the score at 8-6.

The Cavalier defense then went into overdrive, forcing Knott County to turn the ball over on downs. This set up another offensive push by the Cavaliers, highlighting the scrambling of Randy Potter and the impressive running of Oliver. The Cavs marched into the red zone but were unable to convert after a failed pass attempt from Potter to Wright.

The Patriots hoped to end the half with a 14-6 lead after a 96- yard scoring drive to put them ahead with less than five minutes remaining in the half. However, Jenkins responded with Andrew Oliver taking the opening snap of the drive and passing to Randy Potter for a 40-yard gain. After a fumble recovery on the next play, Potter handed off to Oliver who slammed into the hole opened up by his lead blockers for a 36-yard scoring run. The Cavaliers ended the half tied with the Patriots at 14.

The second half opened with a defensive surge by Jenkins to force Knott County to turn the ball over on downs. The Cavalier offensive was equally energized as Potter had his choice of targets among Oliver, Fields and receivers Devin Kendricks and Coty Wright. The strong play of the Cavalier line allowed Potter to break out of the pocket and pick up rushing yards of his own.

The Jenkins offense scored multiple times led by impressive running of Oliver and receptions from Wright and Kendricks.

Knott County made one last push with six minutes to go in the game scoring on a breakaway run. Jenkins proved too much for the home team, pounding out a 42-30 win.

Cole Brown led the defense with 11 solo tackles, followed by Oliver and Wright with 10 solo tackles each. Tyler Holbrook and Austin Fields had eight and seven tackles respectively.

The Cavaliers are at home this Friday against Pineville. Kickoff is set for 7:3 p.m.