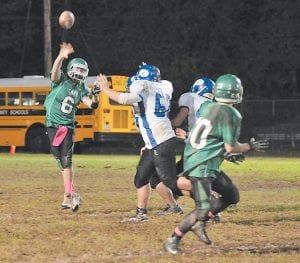 Jenkins quarterback Darian Slone heaved a short pass to teammate Audie Fields in the second half of Friday’s 44-28 loss to Clinton County. Story appears on Page 2 of this edition. (Photo by Chris Anderson)

This game shifted away from Jenkins and right into the hands of Clinton County in a matter of seconds.

The Bulldogs pulled away from the Cavaliers in a span of 56 seconds, scoring a pair of touchdowns late in the opening half, en route to a 44-28 win on homecoming night at Tommy Brush Field in Jenkins on October 15.

Clinton County receiver Jeremiah Johnson hauled in a 32-yard touchdown pass from quarterback Noah Pruitt, fueling what would become 30 unanswered points and putting the Bulldogs up 22-12 with 1:30 left before the break.

Jenkins quarterback Darian Slone attempted a pass that was picked off by Jordan Davis and returned 45 yards for a score with 34 seconds remaining. Pruitt’s PAT run pushed the lead to 28-12.

Clinton County put the game out of reach in the third period.

Running back Josh Shelton scored on a two-yard run with 6:43 to play in the quarter and Pruitt hit Jayden Thair with a 12-yard scoring pass at the 5:04 mark to extend the lead to 42-12.

Jenkins, moved Andrew Watts to the backfield on the ensuing series. He was tackled in the end zone for a safety with 3:13 remaining to cap the scoring for the Bulldogs, now 5-4.

Jenkins quarterback Darian Slone tossed a pair of touchdown passes to Austin Fields in the final quarter. The first was a five-yard toss with 1:19 left in the game. The second was a 23-yard receptions with 31 seconds to play.

Slone had scored on a one-yard run with 10:36 left in the second period to pull the Cavaliers even at 6-all.

The Cavaliers will return to action against Pikeville (6-2) at home Friday night.