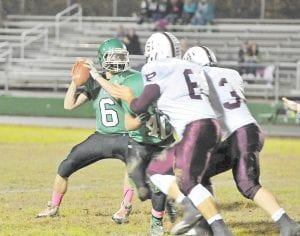 Jenkins quarterback Darian Slone was under pressure much of the fame. (Photo by Chris Anderson)

Pikeville finished up another perfect district schedule with a 57-6 victory over Jenkins in a game played at Tommy Brush Field in Jenkins on October 23.

Pikeville runningback Daric Pugh had just two carries for 122 yards and two touchdowns as he went over 1,000 yards for the season and scored his 50th touchdown.

A.J. Vanderbeck added 98 yards and two scores on five rushes while quarterback Wyatt Battaile completed his only two passes for 43 yards and a touchdown. Receiver Andrew McNamee hauled in a 24-yard touchdown reception.

Jenkins was led by runningback Audie Fields. He carried 14 times for 41 yards and quarterback Darian Slone completed 4-of-12 passes for 47 yards and a touchdown. He was picked off three times.

Pikeville wasted no time getting on the scoreboard and returner Chatlin Jarrell fielded Nate Bates’s kickoff at his own 20-yard line and ran it back 80 yards for a touchdown. Denton Heffington’s PAT kick made it 7-0 with 11 minutes, 45 seconds left.

Dalton Meade tackled Slone in the end zone for a safety just one minute later to push the lead to 9-0.

Vanderbeck then ran 18 yards to push the Panthers up 23-0.

Slone hit receiver Josh Delph with an 18-yard touchdown pass with 6:52 to play in the first period to cut the Pikeville lead down to 28-6.

Vanderbeck scored on a 15- yard run as time expired on the clock to make it 43-6.

Pikeville closed out the scoring. Charles returned an interception 33 yards with 9:20 to play in the third period and then Pugh went 57 yards with 3:20 remaining.