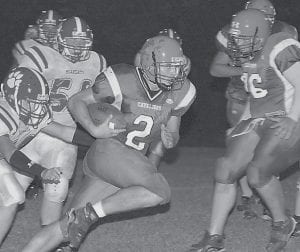 Jenkins quarterback Chris Puckett rushed for a first down during his teams’s double-overtime loss. (Photo by Chris Anderson)

The Jenkins Cavaliers faced an air attack like none they had faced before in a double-overtime loss to Beth Haven Academy last Friday in a thrilling game that neither team deserved to lose.

“I haven’t seen anything like that since Tim Couch played at Leslie County,” Jenkins coach Mark Johnson said.

The Cavs fell behind 14-0 early in the first quarter to the passing attack. At this point the Cavaliers put their load of a running back, senior Johnathan Taylor, to use. Taylor’s first of five touchdowns and 168 yards rushing on the night came from seven yards out. Early in the second quarter Taylor went into the end zone again from one yard and tied the game at 14. Beth Haven’s passing efficiency added two more touchdowns before the half to lead 26-14 at the half.

Pulling themselves together for the second half, the Cavs put together a quick drive to score on a 13-yard plunge from Taylor. Fellow senior running back Steven Stephens added the twopoint try.

The following kickoff was recovered by Stephens to put the Cavs right back in scoring position at the Beth Haven 45-yard line. An eight-play drive found Taylor in the end zone again, this time from seven yards old. The two-point try failed, which would come back to haunt the Cavs. Call it deja vu?

Stephens fell on the next kickoff to give the Cav offense another try, this time from the Beth-Haven 40-yard line. This 10-play drive ended in a quarterback sneak from senior Chris Puckett. Again, a two-point try failed. This score put the Cavs up 34-26.

Beth Haven took a very effective passing game very quickly downfield to score and close the gap to 34-32 with the failed two-point try. The next possession failed to produce points for the Cavs for the first time in the second half.

Cavalier sophomore center Nick Taylor finally came up with an answer for the Beth Haven passing game as he picked off a pass to put the Cavs back in scoring position on the Beth Haven 31-yard line. Four plays later, Stephens took a pass from Puckett in for a score from 25 yards away. Again, the two-point try failed. The touchdown put the Cavs up 40-32 with 2:08 left in the game.

Forty-eight seconds later the game was tied 40-40. The Cavaliers were unable to produce any offense and were forced to punt and play defense against Beth Haven’s powerful offense. Jenkins was able to defend and send the game to overtime.

Coach Johnson brought out a little trickery in overtime and a halfback pass from junior wide receiver Matthew Johnson to Puckett put the Cavs in a tie and an extra point from the win. Another extra-point attempt failed and sent the game into a second overtime.

Having stalled on three plays, the Cavs appeared to line up for a field goal. A little more trickery and quick thinking on the part of Puckett, Matthew Johnson, and tight end Corey Maggard produced a go-head touchdown. Once again, the extra-point attempt failed.

Beth Haven took its turn to score, which it did, and then converted on the extra-point attempt, which gave it a hard-earned 54- 52 win.

An exhausted Cavalier team and staff were applauded by a faithful crowd. Comments like “best high school game I ever saw” and “neither team deserved to lose” filled the air.

The Cavaliers will try to regroup on the road against district power Hazard on Friday night.