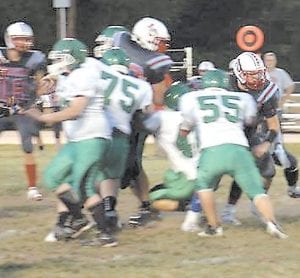 The Jenkins Cavaliers traveled to Allen Central last Friday night to kick off their first road game of the season.

After the season opener against Phelps being called because of bad weather, the Cavaliers and first-year coach Daniel Sexton were anxious to get started.

This game, too, was affected by weather when kickoff was delayed almost an hour because of lightning. The Cavaliers began the game with a good kickoff return by Audie Fields but were unable to convert the possession into a touchdown and were forced to punt to the Rebels. Allen Central capitalized on poor tackling and responded with a 40-yard punt return for a score.

The next Cavalier possession was highlighted by a 20-yard run to the outside by senior Randy Potter on a handoff by quarterback Austin Fields. Following runs to the middle proved ineffective against the Rebel defense during the first half of the game.

The Cavalier defense had several standout plays including an interception by Cody Wright and multiple sacks by Cole Brown and Andrew Oliver.

Coach Sexton applied some changes to the quarterback position, bringing in Randy Potter to alternate with Austin Fields and Andrew Oliver.

This combination allowed the passing game to open up for Jenkins and resulted in a 30-yard bomb from Potter to Audie Fields. This put the Cavaliers in scoring position and was capped off with a 22-yard pass from Oliver to Potter to end the first half.

The second half opened with the Cavaliers continuing to alternate quarterbacks. With Oliver and Austin Fields both not returning after halftime, the Cavalier defense once again stepped up with outstanding plays by Jordan Delph, Randy Potter, Cody Wright and Cole Brown, but were unable to stop the scoring by the Rebel offense.

The Cavalier offensive line struggled late in the second half but was able to free up quarterback Potter to complete several plays to favorite targets Audie Fields and Jordan Delph and a final score by Brown.

The Cavaliers have a bye week coming up before traveling to Clinton County on September 12.