Cavs left in dark in opener 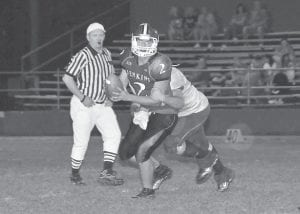 Jenkins quarterback Kevin Brown tried to avoid a Phelps defender as he looked for an open receiver during the Cavs’ loss to Phelps. (Photo by Chris Anderson)

Persistent problems with the lighting foreshadowed a dark evening in Jenkins, as the host Jenkins Cavaliers lost 26-2 to the visiting Phelps Hornets in season-opening high school football action last Friday.

After forcing a Phelps safety and taking the lead in the second quarter, the Cavaliers looked poised to take control of the game. However, Phelps answered with a quick touchdown and never looked back.

The Hornets rolled up 351 yards of total offense, 302 coming on the ground, compared to only 170 yards for Jenkins.

Jenkins quarterback Kevin Brown completed five of 14 attempted passes for 35 yards, and was intercepted twice. Eric Smith caught one of Brown’s passes for 14 yards, while T.J. Rose hauled in two catches for completions of one and 20 yards.

Brown also ran for 50 yards on one play to lead all Jenkins rushers on the night with 57 yards on six attempts. Chris Dishman gained 25 yards on three attempts. Ethan Bowling picked up 17 yards on two tries, Koda Fleming ran for 16 yards on two attempts, and Eric Smith ran the ball 10 times for 10 yards. Rose rushed for one yard and Jordan Stidham picked up eight yards.

Among the game’s highlights was a 40-yard kick return by Eric Smith.