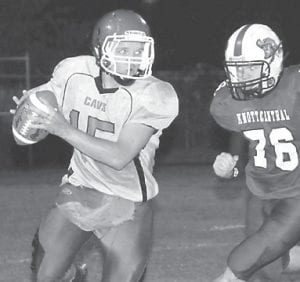 The Jenkins Cavaliers record fell to 4-2 after a 28-21 come-frombehind victory by Knott Central in Hindman.

Jenkins struck first in the contest when freshman quarterback Andrew Oliver connected with Ryan Bentley on a 34-yard touchdown. Aaron Halcomb made the extra point to put the Cavaliers up 7-0 early in the first quarter.

After forcing a three and out, the Jenkins offense took over possession near midfield. Knott County forced a fumble on the ensuing drive, scooped it up and scampered 55 yard for the score. Jenkins blocked the extra point to keep the lead at the end of the first quarter 7-6. Oliver struck again on a quarterback keeper from 55 yards out and Halcomb’s extra point increased the lead to 14-6. Jenkins turned the ball over again late in the second quarter to give Knott Central excellent field position. The Patriots scored from one yard out and the two-point conversion nodded the score at 14 going into halftime.

After a scoreless third quarter, Knott Central scored on its first big offensive play of the game. The 30-yard touchdown run gave the Patriots a 20-14 lead. The Cavaliers showed their resiliency and retook the lead 21-20 on a 44-yard bomb from Oliver to Bentley, which was their second touchdown hookup of the game.

Knott Central scored on a 36- yard touchdown run late in the game and the two-point conversion made the final score 28-21.

The win broke a 36-game losing streak for Knott Central, but Jenkins fought hard and should take many positives away from the game. Andrew Oliver was involved in all three touchdowns and Ryan Bentley is a playmaker that opposing defenses must account for. The Jenkins defense played unbelievably well for the first three quarters and just wore down a little bit in the fourth stanza.

The Cavaliers play their first district game this Friday at home when they host Pineville at 7:30 p.m.