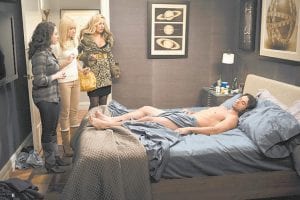 From left, Kat Dennings, Beth Behrs and Jennifer Coolidge are shown in a scene from “2 Broke Girls” scheduled to air Feb. 6 at 8:30 p.m. on CBS. As CBS’ Monday night comedies are pushing the barriers with risque jokes, the network and producers of the comedies strongly defend their work and point to the shows’ success as evidence they are working for viewers. (AP Photo/CBS)

A quick count found 53 sex jokes on the network’s four comedies, which includes “Mike & Molly.” There were also nine jokes about flatulence or bowel movements, and two scenes where marijuana use was clearly implied — one with a teen-age boy and the other with an older woman.

The subject matter leaves some viewers queasy, such as Amanda St. Amand, mother of two college students from St. Louis. She said the shows go past raunchy fun to just plain raunchy. She rarely watches them anymore.

CBS and producers of the comedies strongly defend their work and point to the shows’ success as evidence they’re doing something right. “Two and a Half Men” is TV’s favorite comedy, “How I Met Your Mother” has its best ratings ever in its seventh year and “2 Broke Girls” is a breakout freshman hit. The four shows are among the seven most popular comedies on prime-time television this season, the Nielsen ratings company said.

CBS Entertainment President Nina Tassler said the comedies are “a little risque,” but that the characters are living truthfully within their particular circumstances.

“Mike & Molly” had the least amount of sexual content of the four shows January 16, although it did include jokes about a flasher, breasts, prostitution and erections.

“2 Broke Girls” opened its episode with the two lead characters trading four raunchy jokes with the leering cook in the diner where they work.

“It’s a very different world than 8:30 on Monday on CBS in 1994. … I consider our jokes really classy dirty. I think they’re high lowbrow. I think they’re fun and sophisticated and naughty, and I think everybody likes a good naughty joke. I also think if the show existed only in naughty jokes without the pathos, I would not be happy.”

His show’s brand is “basically in-your-face girls. It is ballsy.” In the January 17 episode, which had four jokes about prostitution and four about herpes, Caroline and Max go to see the madam of a brothel and knock on the wrong door to be greeted by a man wearing a dog collar and leash.

King cited his experience on “Sex and the City” to say he recognizes that “people pull away from something if it’s not in good taste.

One viewer, 36-year-old Allison Trembly of Denver, Colo., said she’s a big fan of the Monday comedies. “I can relate to the humor,” said Trembly, who is single and an economic development and marketing specialist. “Sometimes I wonder if the audience gets some of it. But they must because the night is highly rated.”

Elliot Metz, a 22-yearold news producer from Wichita, Kan., used to watch “Two and a Half Men” with his parents — until they couldn’t anymore.

“It was still funny,” he said. “We just kind of had trouble laughing without looking at each other awkwardly.”

Neil Flynn said the humor is mostly lazy. Flynn, who stars as Mike Heck in the ABC comedy “ The Middle,” said he’s put off by the constant stream of sex and anatomy jokes and is proud that parents and kids can watch his show together without discomfort.

“ It’s pandering to the lowest common denominator,” Flynn said. “I’m no expert, but it seems to me that we’re in danger of dumbing down the audience, where they think it’s a good joke when it’s actually not a very good joke. It’s just a dirty joke, that you could make or your neighbor could make. I just think, without being prudish, that professional comedy writers should write jokes that only professional comedy writers can tell.”

Mark Roberts, executive producer of “Mike & Molly,” said he’s always enjoyed comedy on television where he feels like people are getting away with something.

With six sex jokes January 16 — including references to breasts, flashing, erections and mooning — “ Mike & Molly” was the most sedate of the four CBS comedies.

“There’s certain things you can’t do, you know,” Roberts said. “I mean, I’m not sure what all of them are. ”

Neither is CBS, suggested Chuck Lorre, whose prolific production company oversees both “Mike & Molly” and “Two and a Half Men.”

“That’s one of the great things about broadcast television is nobody really knows what’s appropriate anymore,” Lorre said. “It’s a floating target.”