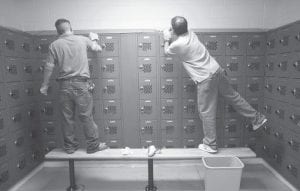 SCHOOL CLOSINGS NOT NECESSARY – Custodians worked recently to disinfect a locker room at Adelle Clark Middle School in Frisco, Texas in response to a recent suspected case of a staph infection suffered by a student. Dr. Julie Gerberding, head of the CDC, says closing schools for cleaning if a student gets MRSA is not medically necessary. (AP Photo/The Dallas Morning News, Sonya N. Hebert)

Drug-resistant staph infections that have made headlines in recent weeks come from what the nation’s top doctor calls “the cockroach of bacteria” – a bad germ that can lurk in lots of places, but not one that should trigger panic.

“This isn’t something just floating around in the air,” Dr. Julie Gerberding, head of the Atlanta-based Centers for Disease Control and Prevention, told members of Congress last week.

It takes close contact – things like sharing towels and razors, or rolling on the wrestling mat or football field with open scrapes, or not bandaging cuts – to become infected with the staph germ called MRSA outside of a hospital, she said.

But MRSA is preventable largely by commonsense hygiene, Gerberding stressed.

“Soap and water is the cheapest intervention we have, and it’s one of the most effective,” she told a hearing of the House Committee on Oversight and Government Reform.

At issue is methicillin-resistant Staphylococcus aureus, a form of the incredibly common staph family of germs.

About one in every three people carries staph aureus in their noses. In about 1 million people, the type they carry is MRSA.

“I like to think of it as the cockroach of bacteria,” Gerberding said, pointing out MRSA’s ability to live on various surfaces and spread by catching a ride on an unwashed hand.

Over time, germs evolve to withstand treatment. Most staph is no longer treatable by the granddaddy of antibiotics, penicillin. By the 1960s, staph also began developing resistance to a second antibiotic, methicillin.

So MRSA is not a new problem. What is new is public anxiety about it.

MRSA mostly causes skin infections, such as boils and abscesses. But it can sometimes spread to cause life-threatening blood infections. Last month, the CDC reported the first national estimate of serious MRSA infections – 94,000 a year. It’s not clear how many people die, but one estimate put the MRSA death toll at more than 18,000, slightly higher than U.S. deaths from AIDS.

There are two distinct strains of MRSA, a type spread in hospitals and other health facilities and a genetically different type spread in communities. The vast majority of victims are hospital patients; only 14 percent of serious MRSA infections are the kind spread in the community.

But the CDC’s report coincided with the death of a 17-yearold Virginia high school student, prompting a spate of reports of MRSA infections in schools. That prompted lawmakers to pepper Gerberding with questions last week:

– Should schools close for cleaning if a student gets MRSA? That’s not medically necessary, Gerberding said. Bleach and a list of other germicides can be used in routine cleaning of areas and equipment where bacteria cluster.

“There’s no need to go in and disinfect a whole school because that isn’t how this organism is transmitted,” she said.

– How worried should parents be? Some 200 children a year will get serious MRSA, and the vast majority will be treated successfully, Gerberding said. Community-spread MRSA is still easily treated by many other routine antibiotics. So wash and bandage cuts, and seek prompt medical care if they show signs of infection.

Most outbreaks of community spread MRSA occur not in schools but in prisons, where inmates share toiletries and lack or don’t use soap.

– Should every patient entering a hospital be tested for MRSA, and isolated if they har- bor it? Some hospitals have begun that, but current guidelines call for that step only if hospitals fail to reduce MRSA infections by less drastic means, Gerberding said.

Her concern: “Patients in isolation get less care.” Doctors and nurses check on them less. They get more bed sores, opening the body to other life-threatening germs.

There is a biological conundrum: Hospital-based MRSA is more common, vulnerable to fewer antibiotics than the strain spread in communities, and those already-ill patients are more likely to die from it. Yet, the community strain of MRSA may be somewhat stronger, possibly explaining why otherwise healthy people sometimes succumb.

It’s a strain called USA300, and if it penetrates the skin it can cause key immune cells – white blood cells – to explode, setting off a chain reaction of inflammation, Gerberding explained. This strain, unlike most hospital MRSA, also produces a toxin known as PVL, and scientists are furiously investigating its role.

New antibiotics are important, but won’t solve MRSA or the myriad other drug-resistant bacteria, she said.

Germs “will always be one step ahead of our drugstores,” Gerberding said. “We have to get back to the basics” – wash your hands and cover your cuts.