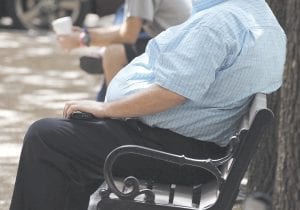 An overweight man rested on a bench in Jackson, Mississippi recently. Rising numbers of American adults have the most dangerous kind of obesity, belly fat, despite evidence that overall obesity rates may have plateaued, government data shows. Abdominal obesity affects 54 percent of U.S. adults, versus 46 percent in 1999-2000, and the average waist size crept up an inch, too, according to the most recent statistics. (AP Photo)

The number of American men and women with big-bellied, apple-shaped figures — the most dangerous kind of obesity — has climbed at a startling rate over the past decade, according to a government study.

People whose fat has settled mostly around their waistlines instead of in their hips, thighs, buttocks or all over are known to run a higher risk of heart disease, diabetes and other obesityrelated ailments.

Fifty-four percent of U.S. adults have abdominal obesity, up from 46 percent in 1999-2000, researchers reported in Wednesday’s Journal of the American Medical Association. Abdominal obesity is defined as a waistline of more than 35 inches in women and more than 40 inches in men.

During the 12-year period studied, the average waist size in the U.S. expanded to 38 inches for women, a gain of 2 inches. It grew to 40 inches for men, a 1-inch increase.

“The increase is a concern. There’s no question about that,” said Dr. William Dietz, an obesity expert formerly with the Centers for Disease Control and Prevention, now at George Washington University.

The expansion in waistlines came even as the overall level of obesity — as defined not by waist size but by body mass index, of BMI, a weight-to-height ratio — held fairly steady.

“What it suggests is that even though the obesity rate may be stable, fat distribution may be changing, which would mean that we shouldn’t be complacent about the plateau,” said Dietz, who was not involved in the study.

Dr. Earl Ford, a CDC researcher and the study’s lead author, said the seemingly contradictory trends are puzzling. He said it could be that Americans are exercising less and getting flabby. But because fat weighs less than muscle, they are not necessarily getting heavier.

The study cites other possible reasons for the increase in belly fat, including sleep deprivation and certain medicines. Also, researchers said the increase might be related to pesticides, the plastics additive BPA and other chemicals that mimic hormones that can affect weight. But the connection is speculative and unproven.

Belly fat not only makes people look apple-shaped but often means fat has built up deep inside the body, around the liver and other abdominal organs.

Compared with fat that lies closer to the surface, this “visceral” fat secretes lower levels of beneficial hormones and higher levels of inflammatory substances linked to obesityrelated ailments, Dr. Lisa Neff, an obesity specialist at Northwestern University. She was not involved in the study.

“In people of the same weight, the person who carries weight around the middle is going to have higher risks” of obesityrelated ailments, Neff said.

The researchers analyzed data from CDC health surveys and inperson exams. Adults’ average age during those years was 45.

Previously released data from the same surveys indicate that about 35 percent of U.S. adults are obese, a level that hasn’t budged much in recent years. Those surveys define obesity as a BMI of at least 30. For example, someone who is 5-foot-4 — the average U.S. woman’s height — would be obese at 175 pounds.

Ford said that for both kinds of obesity, the bottom line message for patients is probably the same: diet and exercise.