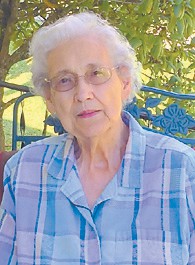 Cecile W. Conatser, 95, died January 11 at her residence in Whitesburg.

A daughter of the late Tom and Lizzie Boatwright Williams, she was the widow of Elmer Conatser. She was also preceded in death by a son, Michael Dean Conatser, and two sisters, Helen Pace and Ruth Banks.

Funeral services were held January 14 at Letcher Funeral Home. Burial was in the Williams Cemetery in Whitesburg.