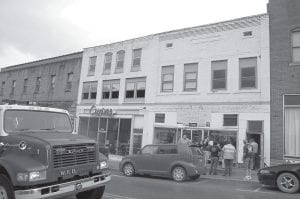 Emergency officials responded to a call in downtown Whitesburg on Monday when an old “drop ceiling” fell into the living room of Sword in the Stone owners Shannon and Angie Branham Ferrell. The Ferrells live above their hobby shop located on Main Street. The Ferrells were getting food out of their kitchen to take down to their store for a Memorial Day cookout for their customers when they heard a loud noise. Members of the Whitesburg Fire Department inspected the apartment and advised the Ferrells not to stay in their apartment Monday night because it looked like tile could drop from the ceiling in other rooms as well. Angie Branham Ferrell said she was told by the fire department that the falling tiles were caused by “a combination of things,” including heavy rain and the renovation of the old Hoover’s Department Store building next door. (Eagle photo)