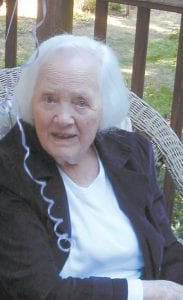 Garnet Adams George celebrated her 100th birthday on January 20. A native of Pound, Va., who now lives in Milwaukie, Oregon, she has Kincer family branches in Jenkins and nearby towns. Mrs. George is the last living of the 19 children of James

Adams and the 12 children born to Sarah Qualls Adams of Pound. After nursing training in Long Branch, New Jersey, she began working as a nurse. She later settled in Portland, Oregon, and became a beautician and operated her own beauty parlor in Portland before returning to hospital work in Oregon City. Mrs.

George’s cousin, Emily Qualls, lives in Wise, Va., and several nephews and their families live in other towns in southwest Virginia and southeastern Kentucky.