Celebrating the town and movie of Big Stone Gap 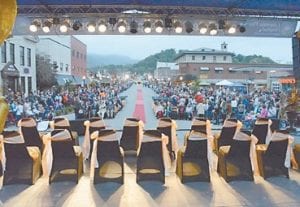 Stars of Adriana Trigiani’s “Big Stone Gap” came back to the small Virginia town and celebrated the movie’s opening weekend with a jam-packed schedule of events. It has been two Octobers since Ashley Judd sped down Wood Avenue in a baby blue Jeep as she portrayed Ave Maria Mulligan, a 40-year-old pharmacist and self-proclaimed town spinster whose life changes when a family secret is revealed. Trigiani made a wish of Patrick Wilson’s late grandmother come true when Trigiani asked Wilson to play the part of Jack MacChesney, a coal miner in love with Ave Maria. Whoopi Goldberg requested to play Fleeta Mullins, a spunky cashier at Mutual’s Pharmacy. Jenna Elfman was given 48 hours’ notice before she dived into the role of a sexy bookmobile librarian named Iva Lou Wade. Trigiani managed to also cast Paul Wilson, John Benjamin Hickey, Jane Krakowski, Anthony LaPaglia and Jasmine Guy in an independent film based on her New York Times best-selling novel, “Big Stone Gap.” Trigiani, whose family moved to Big Stone Gap when she was six, was adamant about having the movie filmed solely on location in southwest Virginia. She wanted the town itself to have a starring role in her film. Some of Trigiani’s high school classmates, friends and other prominent figures of her childhood can be spotted in several scenes. Not forgetting where she came from, Trigiani, who lives in Greenwich Village in New York City, insisted that events celebrating the movie’s opening box office weekend be held in her beloved town. Judd, Patrick Wilson, Paul Wilson, Elfman, Erika Coleman and others joined Trigiani in Big Stone Gap Saturday, giving coal country a chance to see the movie stars up close. Trigiani started the day early with a pancake breakfast at Trinity United Methodist Church. Patrick Wilson ran in a 5K with a route that included several movie scene locations. After riding down Wood Avenue in a horse-drawn coach, Trigiani co-hosted a parade with a WCYB reporter which aired live on WCYB. The parade included the 2015 cast of The Trail of the Lonesome Pine Outdoor Drama, “Big Stone Gap” movie extras in 1978-era costumes and vintage cars seen in the movie. Floats based on scenes and themes from the novel and several area marching bands were also in the parade lineup. Elfman, Paul Wilson and Coleman, who plays Pearl Grimes, were escorted through the parade atop vintage cars. Following the Wise County bookmobile, Patrick Wilson drove the blue Jeep with Judd by his side to conclude the parade. Parade watchers quickly headed toward the Jeep to take pictures of Wilson and Judd as well as ask for autographs. Wilson smiled and soaked in the moment as he posed for photos and signed books and posters. Locals sold T-shirts, mugs and ashtrays commemorating Trigiani’s movie. The town was decorated with mums, fodder shock and other fall foliage. After presenting a special award to her mother Ida at The Fall Show of the Garden Club at the Southwest Virginia Museum, Trigiani joined the cast for a press conference at Heritage Church. A reunion of movie extras followed at the Trail of the Lonesome Pine Theater and June Tolliver House on Clinton Avenue Trigiani and the stars spoke to more than 200 people and signed many autographs at a fundraising reception at the original home of John Fox Jr. on Shawnee Avenue. Paul Wilson and Elfman, whose characters married in the movie, cut a cake made by local baker Donna Ball. The actors made handprints and signed blocks of cement before leaving the Fox house to head back to Wood Avenue for a red carpet event. The cement blocks will be on display at the new visitors center where the scenes at Carmine’s restaurant were filmed. Trigiani introduced the cast of “Big Stone Gap” as they walked the red carpet. Seated atop a temporary stage, the actors addressed the large crowd. The long day of events organized by members of the Lonesome Pine Arts and Crafts, Inc. concluded with a street dance consisting of music from 1978. 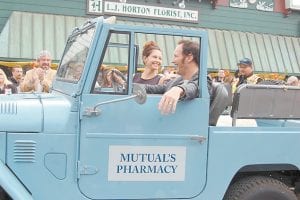 Patrick Wilson, who spent summers as a child in southwest Virginia visiting his grandparents, smiles as he drives Ashley Judd through a parade celebrating the opening box office weekend of “Big Stone Gap.” 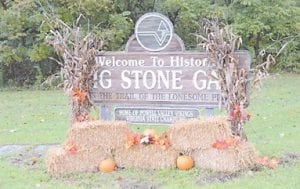 The town of Big Stone Gap, Va. is decorated with fall foliage. (Photo by Ron Flanary) 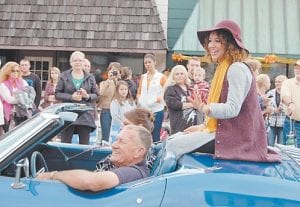 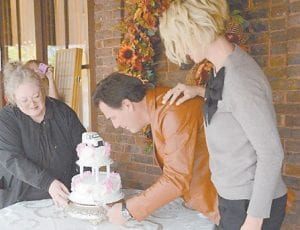 Donna Ball watches as Paul Wilson cuts the cake she made. Jenna Elfman is pictured at right. (Photo by Ron Flanary) 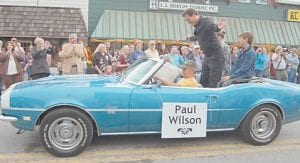 Paul Wilson bows to the crowd during the parade on Saturday morning.

Jenna Elfman waves and recorded her view of the parade on a smart phone. 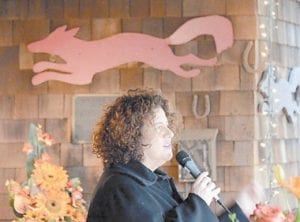 Writer and director Adriana Trigiani talked about her movie at a reception at the original home of John Fox Jr. (Photo by Ron Flanary) 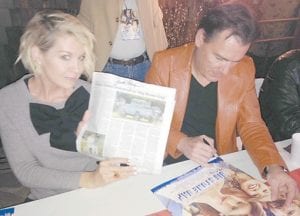 Jenna Elfman holds up a copy of The Mountain Eagle that she signed during an autograph session at the original home of John Fox Jr. Paul Wilson is pictured beside her. 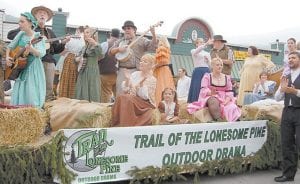 Pictured is the 2015 cast of The Trail of the Lonesome Pine Outdoor Drama. 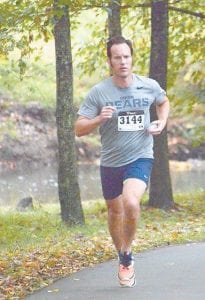 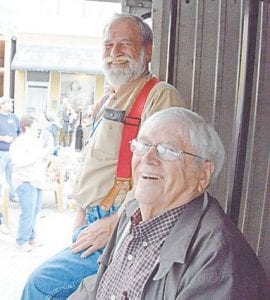 Jack McClanahan, who was Adriana Trigiani’s inspiration for the lead male role of her movie, rides in a bookmobile with James Varner, who drove the Wise County Library System bookmobile when Trigiani was a child. (Photo by Ron Flanary) 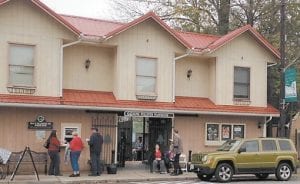 The June Tolliver Playhouse is home of The Trail of the Lonesome Pine Outdoor Drama. 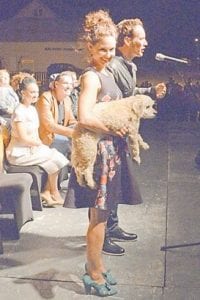 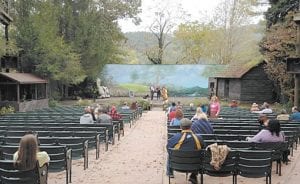 A couple of scenes of “Big Stone Gap” were filmed at the outdoor theater pictured above. People ate lunch and listened to music on Oct. 10 during a reunion of movie extras. 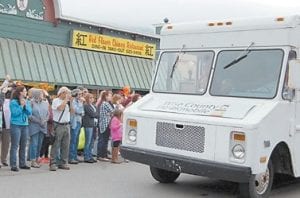 An old bread truck is made to look like the Wise County bookmobile. Jenna Elfman drove the vehicle in “Big Stone Gap.”