Cell phone in the AC unit – it’s all the rage 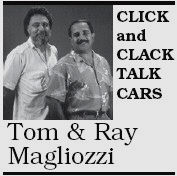 My daughter has a uniquely equipped ’91 Toyota Corolla. It now features a cell phone IN the air-conditioning unit! The car doesn’t have louvers that direct the air, so the air comes through an open space on the dash. Anyway, she suddenly slammed on the brakes, and the cell phone, which was sitting on the passenger seat or console, flew into the AC – and that’s where it still is. That’s her story, and she’s sticking with it. We’ve gotten a lot of “mileage” out of this story, but no solutions. Any ideas? – Fred

TOM: Well, it was probably time to upgrade the cell phone anyway, Fred. I’m sure there’s one with more megapixels and an optional butt-scratcher out by now.

RAY: My guess is that, despite the story she’s sticking with, she used the air vent itself as a cell-phone holder. It’s the perfect size for that.

TOM: And then she either pushed it in too far or stopped short, and … down the drain it went.

RAY: The good news is that it won’t harm the car at all. It’ll just sit there in the duct and stay cool. It’ll ring for a couple of days, but once the battery dies, you’ll never know it’s there.

TOM: So option No. 1 is to forget about it and replace it.

RAY: But if you’re on the retentive side, Fred, or the phone’s memory card has some prized photos of your daughter and her boyfriend jello wrestling, you can try to retrieve the phone by taking apart the air duct.

TOM: Depending on which vent the phone went into, it may be relatively easy to access the duct in question. The ones on the sides are easier than the ones behind the center console. If it’s in the center, it might require removing the dashboard.

RAY: If you’re so inclined, ask your mechanic to investigate. Tell him which vent the phone entered through, and ask him how difficult it is to access the duct that supplies that vent. If he runs into the men’s room and locks the door, you have your answer, Fred.