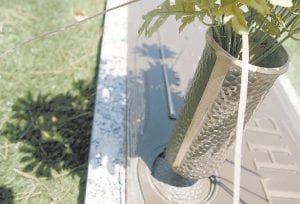 A bronze vase is seen on a headstone at Green Acres Mortuary & Cemetery in Scottsdale, Ariz. While reports of copper wire theft are commonplace, the macabre trend toward stealing metal flower vases from cemeteries has taken on a life of its own. (AP Photo/East Valley Tribune)

They mostly come for metal these days, but some creep into cemeteries around the country searching for antiques, flowers and even body parts.

Grave robbers – established enough in history to be cursed on the walls of Egyptian pyramids – are plundering modern cemeteries, looking for quick cash in the objects people choose to memorialize their dead.

In West Virginia, it was vases bolted to headstones. In Washington State, it was bronze markers on veterans’ graves. In Chicago, it was nearly half a million dollars’ worth of brass ornaments.

“It’s a crisis of the times,” said Ruth Shapleigh-Brown, executive director of the Connecticut Gravestone Network, which monitors cemeteries for theft and vandalism. “People are finding a way to make money.”

Ten years ago metal urns, flag holders and ornaments in cemeteries were mostly ignored by thieves, who stole grave markers and other stone fixtures for the antiques market, said Shapleigh-Brown.

But with copper currently selling for about $3.75 per pound – close to the historic highs of over $4 a pound last seen in 2006 – thieves are now carrying off those brass and bronze memorial tokens, which can be melted down for the copper they contain.

“I don’t know what could be more sacred than protecting our cemeteries,” said Delegate Kevin Craig, D-Cabell, who co-sponsored a law in West Virginia after a bronze door was stolen off a tomb from a cemetery in his district in 2006.

West Virginia’s new law hasn’t entirely dissuaded thieves, though: a few months after it was signed by Gov. Joe Manchin last fall, 150 copper vases worth about $18,000 were stolen from graves at a St. Albans cemetery.

“It’s a crime of opportunity,” said St. Albans Police Chief Joe Crawford, whose department has arrested a suspect in the cemetery thefts.

“A cemetery is a walk in the park” compared to the closed coal mines and active power stations where thieves also seek out copper, he said.

Robert Fells, general counsel for the International Cemetery and Funeral Association, cautioned that thieves who plunder cemeteries face what can be a stiffer challenge: selling the looted objects.

“It’s pretty obvious what these things are and where they came from,” said Fells, whose organization includes more than 6,000 cemeteries, funeral homes and related businesses among its members.

Another factor lessening the sting of such thefts is that many homeowners’ insurance policies provide coverage for them under the category of “offsite personal property,” Fells said.

Those insurance policies don’t cover some of the other things sought by thieves at cemeteries, though, which include antique gravestones, flowers and even, in a few grisly instances, human remains.

Most commonly, old graves are disturbed by people hunting for Revolutionary or Civil War relics to sell. In rare cases, body parts are removed by groups for use in black magic ceremonies, said Nicholas Bellantoni, Connecticut’s state archaeologist.

“It’s kind of ghastly, but we’ve seen it,” said Bellantoni, who is based at the University of Connecticut. “It’s heartbreaking and frustrating, but in hard economic times, you realize not everyone has the same religious bent or the same scruples about this.”

Nothing so sinister lurked behind a theft at Evergreen Cemetery in Pittsford, Vt., but in some ways it was just as callous.

Barbara Ketcham has been bringing buckets of flowers to the graves of her parents, husband and sister for decades, only to find shortly before the Fourth of July this year that three of the four containers were missing, flowers and all.

“I’ve had that one bucket out there ever since my husband died 23 years ago, and no one ever touched it,” she said.

The cruelty of the theft won’t stop Ketcham from mourning her loved ones.

“I’m planting marigolds in the ground now,” she chuckled. “So far, they’re still there. We’ll see.”