Cemeteries reflect when county was a melting pot 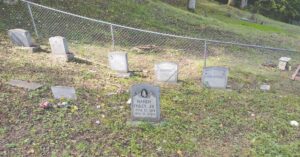 A chain-link fence separates a Black cemetery (foreground) and Catholic cemetery on B&O Hill in Jenkins. “The African-Americans and Catholics were considered the same level, and they were buried up there in that cemetery. One side was reserved for African-Americans, and the other side was for Catholics,” said JoAnn Toth Baldwin, a member of St. Francis Catholic Church in Jenkins whose grandparents immigrated from Hungary. (Photos by Sam Adams)

The names in this cemetery bring to mind far-off places — Romania, Italy, Croatia. Some of the names are unknowable to anyone who can’t read a Slavic language.

Nearby on this peaceful hillside in Jenkins you’ll find other names — Osley, Clispy, Norwood.

Here on B&O Hill are the final resting places of people who came to the mountains to mine coal, and many died because of it.

Letcher County was once a more cosmopolitan place. Consolidation Coal, which built Jenkins, McRoberts and Fleming, recruited miners from other mining regions of the United States and other countries, sawyers, millers, carpenters, nurses, and bookkeepers from anywhere it could find them.

“Consol went down to Alabama, Birmingham in particular, and they would pay their passage if they would come to eastern Kentucky. They didn’t like that in Birmingham, and they would arrest them if they caught them recruiting people,” said D. Charles Dixon, a retired history teacher, Jenkins City Councilman and mayor. 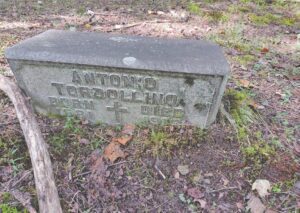 This stone in the Catholic cemetery marks the grave of Antonio Tordollino, who was born in 1881 and died in 1918 or 1919.

Dixon has written several books about the history of the town.

“They brought the immigrants in and the Blacks because there weren’t enough people in eastern Kentucky,” Dixon said.

A chain-link fence separates the two graveyards on B&O Hill, a silent reminder that while the town was diverse and all races worked together in the mines, outside was different. But that the graveyards are side by side underlines how Blacks and Central Europeans were viewed by others in the community.

“The African-Americans and Catholics were considered the same level, and they were buried up there in that cemetery. One side was reserved for African- Americans, and the other side was for Catholics,” said JoAnn Toth Baldwin, a member of St. Francis Catholic Church in Jenkins whose grandparents immigrated from Hungary, or what was then known as the Austro-Hungarian Empire.

In the Catholic Cemetery, the stones — if they have any — are cut stone crucifixes, a Tau Cross, small, spare stones for babies, and some carved in the Cyrillic alphabet of eastern Europe. 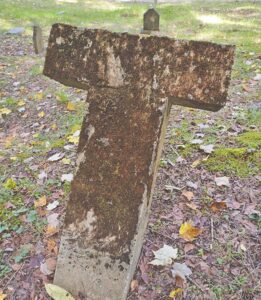 Many of the stones in the two cemeteries are covered in moss and lichen. Some are broken.

In the African-Americans side, stones are simpler than those in the Catholic Cemetery, though there are many graves in both marked only by rectangular sinkholes.

Dixon said there is another cemetery now hidden in the trees that was exclusively for immigrants.

The families of the Russians, Poles, Italians, Czechs, Croatians, Hungarians, African-Americans, and others that moved to Jenkins between 1910 and 1930 have mostly moved away now. With no family left to care for the graves, the cemeteries have largely faded into the fallen leaves. The City of Jenkins sends a crew to cut the weeds occasionally, keeping them fairly free of brambles, but the stones are covered in moss and lichen, many are overturned or broken, and ornamental fences are crumbing.

Many of the people who came to Jenkins spoke no English, and some had no job at all when they arrived, like Baldwin’s grandparents who landed at Ellis Island with their first daughter, Mary.

“He couldn’t speak English,” Baldwin said. “Because he had worked in the coal mines in Budapest, they sent him here.”

Since there were few immigration rules at the time, forms filed show where people came from, what ship they arrived on and whether they were a passenger, crew member, or stowaway. For those who couldn’t speak English, Customs employees pinned a note with their destination written on it to their coats, and sent them on their way.

Dixon recalled a Czech man whom he referred to as “Papa John,” who told him his story of coming to America, and then to Jenkins.

“He just went to the Number 4 mine, which at that time was behind the shop area, and he just took his shovel and started loading. The boss said who is that? He’s not on the roster,” Dixon said. Papa John didn’t speak English, he had never been hired, but he went to the mine day after day and loaded coal. The company finally hired him, and he learned to speak English later.

Dixon said the man didn’t come to America looking for a job; he left Czechoslovakia because he was afraid of being arrested.

“Someone came to induct him into the army, and he beat him to death with a shovel,” Dixon said. “When he did that, he took off to America.”

Consolidation Coal’s company magazine, called the Mutual Monthly, often printed articles in foreign languages. In “Extracting Appalachia: Images from a Company Town,” author Geoffrey L. Buckley noted that an article in 1921 was printed in English, Italian, Polish, Russian, Hungarian, Romanian and Slovak because there were so many miners who could read only in their mother tongue. Hungarian was regularly found in the magazine, as many miners had been born in the Austro-Hungarian Empire.

“In McRoberts and Jenkins, they taught English at night so the men could understand what the bosses were saying,” Dixon said.

Browsing the U.S. Census for 1920 Jenkins, there were households from, Greece, Hungary, Belarus, and Belgium. In all, at least 15 foreign countries and 16 states were represented in the population of Jenkins that year. Other areas had residents from Syria, Spain, and British Honduras.

Despite the diversity, there was still segregation, not only between white and Black, but among the different nationalities. The population of Jenkins was 4,707 in 1920 — double what it is today — and the homes would often house up to 20 people. In those cases, there was almost always a family represented and then several lodgers, generally of the same nationality and always of the same race.

One section of town, now known as Pine Lane in Dunham, was originally called “Hunky Row,” an offensive nickname for Hungarians. But later, Dixon said, when William Toth became mayor, he changed the name.

Baldwin said her father changed it because a Czech neighbor objected to being called by the pejorative name for a Hungarian.

The huge influx of immigrants had died down before 1920 as many had not returned to the U.S. after fighting in World War I. But the exodus didn’t last long. For the next 20 years the population boomed and Jenkins had a population of 9,426, nearly five times today’s population.

By 1930, most of the immigration from Europe had stopped in Jenkins, though the population of the town and Letcher County continued to grow until World War II.