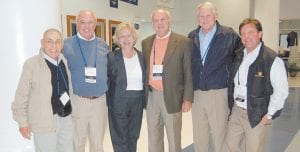 LETCHER COUNTY CONNECTIONS — Five businessmen with Letcher County connections were among a group of about 70 central Kentucky leaders who stopped in Whitesburg on Monday while touring the mountains. Posing for this photo with Letcher Schools Supt. Anna Craft (third from left) were (from left) Oscar Dee Dawahare, whose father opened the first Dawahare’s store in Jenkins; Webb Companies founding members Don Webb and Dudley Webb, former Premium residents whose grandfather, Nehemiah Webb, founded The Mountain Eagle in 1907; Phil Greer, a native of Jenkins whose commercial real estate firm Greer Companies is located in Lexington, and Woodford Webb, chairman of the board of Commerce of Lexington and son of Don Webb. (Photo by Sally Barto)

About 70 members of the Bluegrass business community visited Letcher County on Monday as part of a two-day bus tour of eastern Kentucky.

Webb is an official with the Webb Companies, a Lexington development firm started by his father, Don Webb, and his uncle Dudley Webb, both of whom are Letcher County natives. The trip included stops in Whitesburg, Irvine, Jackson, Hazard, Pikeville, Prestonsburg and Paintsville.

“All of you know Lexington and eastern Kentucky have tremendous ties — family ties, cultural ties and economic ties,” said Lexington Mayor Jim Newberry. “We are very grateful for that relationship.”

Whitesburg Mayor James Wiley Craft and Letcher County Judge/ Executive Jim Ward met the bus in Hazard and spoke with mayors, regional leaders, business owners and government and education officials riding the bus on its way to Letcher County. “I pointed out all of the important places in Whitesburg,” said Craft. “We are moving in the right direction.” State Rep. Leslie Combs told the business leaders she wished there was time to take them to the top of Pine Mountain near Whitesburg to see the view.

“There is a tremendous amount of beauty here,” said Combs. Brenda DePriest, secretary and treasurer of the Letcher Chamber of Commerce, said Letcher County is moving in a more positive direction than she has seen it move in years.

“More people are working together for the betterment of our community,” she said.

Letcher Schools Supt. Anna Craft said there are many good people from Letcher County who now live in Fayette County, several of whom she said made the bus trip on Oct. 12.

“Our alumni have been very faithful to give back,” said Craft, adding that “Don and Dudley Webb have been so faithful in funding” a concert grand piano at Letcher County Central High School.

“It takes people who do not forget where they came from,” Craft said.

Brenda DePriest said several of the business leaders who made the trip had never been to Letcher County before. “I hope they all felt welcome and will one day return to our area when they can take longer to appreciate the beauty of our mountains and culture of our area,” she said.

“Communication and understanding is as important as ever in the current economy,” said Woodford Webb. “Our economic and social ties are so interdependent that I felt it important for our key regional leaders to get better acquainted with what makes eastern Kentucky tick. Its deep-rooted heritage combined with all the great people who have come from the region made it an easy choice for our first ever regional tour.”