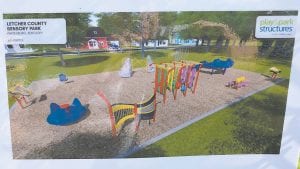 Pictured above is a rendering of the Letcher County Sensory Park now under construction in Whitesburg, next to the city’s swimming pool. (Photos by William Farley)

Children in Letcher County who are affected by sensory disorders like autism will now have their own specially designed place to play in Whitesburg.

Last Friday marked the groundbreaking ceremony of the Whitesburg City Sensory Park Playground, which is located beside the Whitesburg Swimming Pool. The park is specially designed for children with sensory processing disorder and other sensory disabilities.

Whitesburg Mayor James Wiley Craft opened the ceremony by calling the day an “auspicious occasion” to develop a place for “children to play and feel welcome in the city.” Craft thanked the Sensory Park Council, the Whitesburg City Council and everyone who took part in obtaining the funding to build the park.

The idea of the park has come a long way since March 2017 when Gwenna Pennell, President of the Autism Advocacy Commission and Chairperson the Sensory Park Council, attended a city council meeting to thank the council for donating land for the park. At that time, Pennell said an auction held by the park committee had raised $10,000 and the committee aimed at a March 2018 opening date for a park to serve the needs of children with sensory disorders. Mayor Craft told her that the council was ready to provide whatever help it can for worthy causes.

In June 2018, Craft asked the council to approve an emergency arrangement to enter into a loan agreement to pay for the playground equipment, which had been shipped before the agreed shipping date, a discount could be maintained. This means the equipment is in Whitesburg and ready to be installed when the site is prepared. Water Maintenance Director Chris Caudill said he and contractor Lannie Day had determined that the site will need new culverts and a large concrete “pour” before the equipment can go up and said they hope it will be ready by the end of September.

Gwenna Pennell told the gathering that the committee had dreamed and hoped and planned for the park, and the “dream of the Whitesburg City Sensory Park Playground has become a reality.” She thanked Craft, Caudill, and the council and said that special needs children deserve a safe place to play and will now have one.

Committee member Carrie Hall also spoke and said that autism affects more children than ever before, and that it is a real struggle to take special needs children to other parts of the state for care. She added that something as seemingly simple as a playground is critical to their development.

“Glenna and I planned this five years ago to develop a sensory park,” said Hall. “I look forward to seeing it finished.”

The park will contain an obstacle course, a climbing wall, an exploration station, swings with safety harnesses, and wind chimes. These and other play sites are all designed to address the needs of children with sensory disorders. It will also have a rubber safety surface to protect children in case of falls.

On April 26, the Centers for Disease Control and Prevention released new data on the prevalence of autism in the United States. This surveillance study identified one in 59 children (one in 37 boys and one in 151 girls) as having autism spectrum disorder (ASD). Less than half the children identified with autism (43 percent) had received comprehensive developmental evaluations by age three. This proved true despite the fact that the vast majority (87 percent) had developmental concerns noted in their medical or educational records before age three. (Information from the CDC update on the Autism Speaks website).