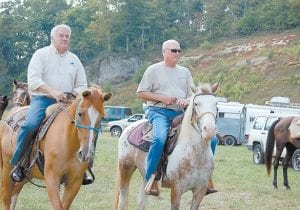 The first phase of the Pioneer Horse Trail atop Pine Mountain is complete and equine enthusiast Jimmy McIntosh was credited during Tuesday’s ribbon-cutting ceremony for seeing that the project was finished.

Kentucky First Lady Jane Beshear quickly threw her support behind the idea after meeting with Letcher Judge/Executive Jim Ward and others in 2005.

“When Steve was first elected and we went to one of our first meetings, Judge Ward and many of you in this community knowing that I am a horse person said ‘We have this trail we’ve been working on and can you help us’,” said Mrs. Beshear, at a ribbon-cutting ceremony for the horse trail on Aug. 27. “Of course I was a little green as far as how all the political stuff was done. I said, ‘Sure, we’ll get that done right away.’ Here we are five years later.” 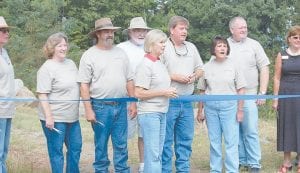 Above, preparing to cut a ribbon marking the end of the first construction phase of the Pioneer Horse Trail atop Pine Mountain near Whitesburg were Kentucky First Lady Jane Beshear, Letcher Judge/Executive Jim Ward and his wife Joan, and Craft’s Colly resident Jimmy McIntosh, who spearheaded the effort in 2005.

Construction of the horse trail began in 2007 but was held up because of state and federal requirements for more than three years. In December 2008, former Kentucky Fish and Wildlife Commissioner Jon Gassett ordered a halt to work on trail after Kentucky Resources Council Executive Director Tom FitzGerald wrote letters to Gov. Steve Beshear and Gassett complaining about bulldozer work being done near Little Shepherd Trail.

“I thought that we could get this done very quickly, but it has taken a lot of hard work by a lot of people — people who have persevered through study after study trying to make sure that what we were doing was done correctly,” said Mrs. Beshear.

After three years of waiting for approval to move forth on the trail, Kentucky Department of Fish and Wildlife officials in April said the county had fulfilled its commitment to comply with state and federal regulations and gave permission to proceed with work on the trail. 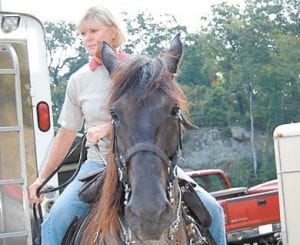 At right, Mrs. Beshear, who describes herself as a horse enthusiast, began her trail ride.

“In that period of time while we were waiting there was so much work going on to make this trail a reality,” said Mrs. Beshear. “I had this dream as a horse person that we would have a trail that would go from one end of Kentucky to the other so that people who would come and visit in our state would have the opportunity to see what we have to offer — our mountains, our lakes, our communities, our culture, everything that makes us so special in our state.”

“It is the most beautiful site looking out over that mountain and knowing what we are doing is right,” she said. “This is an opportunity for this whole region, not only Letcher County but all of eastern Kentucky, to take advantage of what you see every single day of your lives. There are so many people all across this region, this country, that want to come see what you have day in and day out.”

Mrs. Beshear said Letcher County has the opportunity to become an adventure tourism destination. She thanked McIntosh, who is president of the Letcher County Pioneer Horse Trail Committee, for his perseverance.

“You have put everything you believe in to make sure it happened,” she told McIntosh.

State Rep. Leslie Combs said McIntosh served as her assistant on the trail project. “This gentleman has worked tirelessly on this project,” said Combs.

“I’m a happy man today,” said McIntosh. “I hope everyone enjoys it. It is going to be a good thing.”

“Pine Mountain is such a beautiful place and I can guarantee you with the promotion that will take place for our trail system we’ll find that people will come from all over this country to enjoy what you have right here in Letcher County,” Mrs. Beshear said.